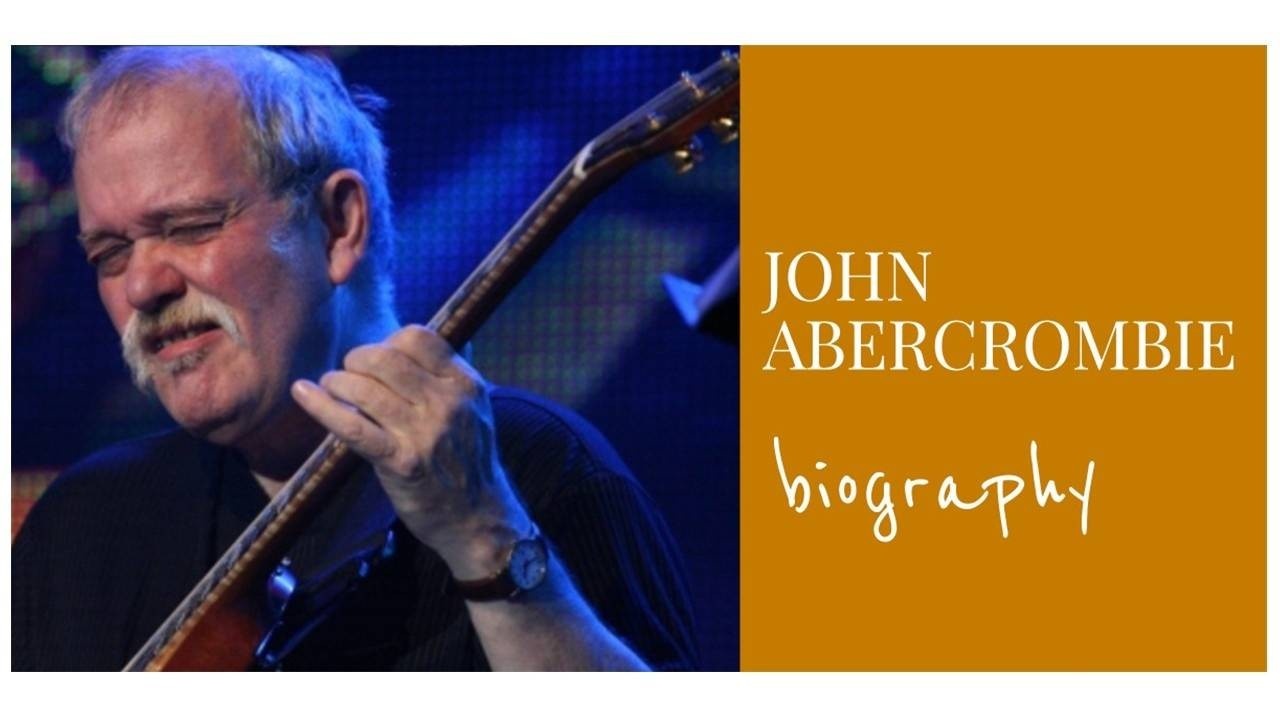 John Abercrombie was a modern jazz guitarist known for his many recordings on the ECM record label with musicians including Ralph Towner, Jack DeJohnette, Dave Holland, and Marc Copland.

Historically, he represents a bridge between the traditional jazz guitarists such as Wes Montgomery and Barney Kessel, and the following generation: Metheny, Frisell, and Scofield.

Abercrombie was born in Portchester, New York, 1944. He started learning to play the guitar at age 12 on a $40 Harmony guitar, which he recalls eventually using as a baseball bat.

Abercrombie cites early rock and roll musicians such as Chuck Berry, The Ventures, and Elvis Presley as his main inspirations during this time.

His first band played mariachi and polka music, and included accordion, drums, maracas, harmonica, and trumpet. "It was interesting. I mean it probably would be a hip band today", recalls Abercrombie.

However, after being introduced to Barney Kessel by a local guitar teacher, he was immediately taken with jazz. He began working towards becoming a professional jazz musician, much to the dismay of his music teacher and parents.

After some initial trouble finding a college jazz program, he eventually stumbled across a Berklee catalogue with a picture of the Hungarian jazz guitarist Gábor Szabó on the cover. Abercrombie auditioned for the program, and began his studies in 1962.

At the time, the Berklee program was quite small, and included only 10 guitar players. The playing level of the students varied wildly, ranging from beginners to a young Keith Jarrett (who soon left to begin his professional career).

Although Abercrombie was initially discouraged at Berklee, he found confidence through teachers including Herb Pomeroy and guitarist Jack Peterson. Peterson was a new teacher, and his lesson plans were erratic: Bach violin concertos one week, Charlie Christian solos the next. However, Abercrombie recalls, "...he was such a good player that he was very inspiring".

It was around this time that Abercrombie discovered what would become his favourite record of all time - The Bridge, by Sonny Rollins. This record featured Jim Hall's understated, contrapuntal guitar playing which gave him a model to aspire to.

Abercrombie left Berklee before graduating, and began his life as a professional gigging musician. He started playing R&B with the Danny White Orchestra, which eventually led to an organ trio stint with the B3 player Johnny "Hammond" Smith. This group performed seven nights a week playing soul, funk, and a bit of jazz.

In 1968 Abercrombie had his first recording experience with this group, although he recalls that technically he was subbing in for George Benson.

Switching gears, Abercrombie linked up with the Brecker Brothers and Billy Cobham to form the fusion band Dreams. Their music used a mostly even-eighth note rock feel, with modal chord vamps of one or two chords.

Although the band was not a commercial success, each of the members would eventually find success in their own careers: the Brecker Brothers became fusion superstars, and Billy Cobham went on to play with Miles Davis and John McLaughlin.

Abercrombie loved the players in the group, but felt something was missing musically. Additionally, he realized that playing in a strictly rock feel was hurting his swing time feel.

While working with these various groups, he had been bouncing back and forth between Boston and New York. Eventually, he settled on New York in the early 70s, where he would join Chico Hamilton's group (whose past guitarists included Jim Hall and John Pisano).

Abercrombie recalls a phone call with Jack DeJohnette as his big break. DeJohnette was following up on a recommendation from a friend, and asked Abercrombie to jam at his house with Miroslav Vitous.

The two became close and played in many different settings over the coming years, one notably including with Mick Goodrick (teacher of Pat Metheny and author of The Advancing Guitarist).

In 1973 Abercrombie was contacted by Manfred Eicher, owner of the ECM label. Eicher had heard the guitarist on a record by the trumpeter Enrico Rava, and persuaded Abercrombie to make his own records.

ECM was a good fit for Abercrombie, as he shared a kindred musical aesthetic with Eicher. The records he made during this time were contemplative, atmospheric affairs which helped to define the "ECM sound".

Abercrombie also recorded many records for the ECM Label as a sideman for  DeJohnette, starting with Untitled (1976), Pictures (1976), New Rags (1977). Generally these records were made quickly, with 2 recording days and one day of mixing.

In addition to their own records as leaders, Abercrombie and DeJohnette teamed up with bassist Dave Holland to form the supergroup Gateway. The trio made four records from 1976-1996, and it was one of Abercrombie's personal favourite groups.

Having built a reputation on his plethora of ECM albums, over the next 40 years Abercrombie went on to work with musicians including Michael Brecker, Marc Johnson, Kenny Wheeler, Peter Bernstein and more.

Abercrombie constantly experimented with his tone and technique throughout his career. Like fellow guitarists Pat Metheny and Bill Frisell, he experimented with guitar synths, and in his later years he abandoned the pick in favour of a Wes Montgomery-esque thumb technique.

Abercrombie's final record, Up and Coming, was released 2017 with an all-star band of Marc Copland, Drew Gress, and Joey Baron. He died of heart failure at his home in New York at the age of 72.

Brush up on some more history with "The Who's Who of Jazz Guitar"!
John_abercrombie.jpg [image in header] is licensed by CC BY-SA 3.0