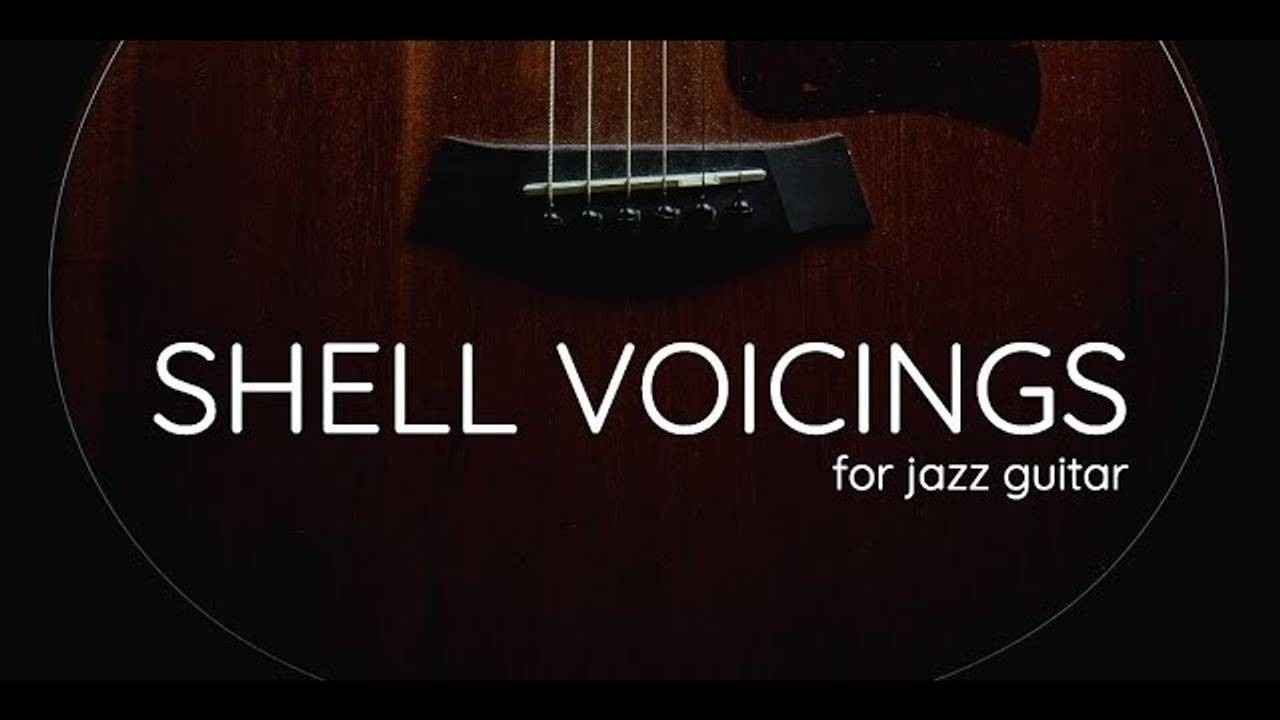 How to Play Shell Voicings for Jazz Guitar (3-Note Chords)

What are Shell Voicings Chords ?

"Shell voicings" are a family of chord shapes found on the lower strings of the guitar, which include only the essential tones (1, 3 and 7) of each chord. These voicings were pioneered by guitarists like Freddie Green and Django Reinhardt, and are a staple of traditional jazz guitar playing.

For our purposes, they are one of the best ways to either get back to basics (to better understand harmony on the guitar) or to get started comping. So, forget about memorizing tons of chord shapes - you simply need a few basic shell voicings!

As an analogy, shell voicings for jazz guitarists are akin to learning your "C, D, E, G and F open chords" when first starting to play guitar.

The 3-note shells describe the harmony perfectly because they contain the essential notes of the chord: degrees 1, 3 and 7. By playing just these notes, the ears are able to pickup the harmonic context fully.

Yes, simple. But still very important for jazz guitarists of all levels.

Not only will you be able to comp through entire tunes with these easy-to-learn, easy-to-play and *good sounding* shell voicings, but also:

This last point is extremely important. It's this kind of process that allows guitarists to break away from standard chord shapes.

Once we don't have to play bass anymore, oh boy, watch out! Hear Wes Montgomery play these fast chord runs?  ... all rootless voicings!

In summary, shell voicings help you learning both the instrument and harmony better because you have to know what you are doing instead of always proceeding by shapes. From there it becomes easier to extend to more advanced (rootless) voicings and so on.

I love playing the blues. In the video (above) we apply 3-note chords to the blues in Bb. Nothing fancy, just a 3-chord blues using 3-note chords on my 3-dollar guitar. (Ok, not really!) For the gearheads: it's a Takamine EC 132 SC. ;-)

I highly encourage you to use that Bb blues in the video as your starting point. Play along with the video, and immediately after, play by yourself at faster tempos. Attempt to play by rote! Then see if you can play the exact same blues progression but in the key of F, using only shell voicings found around fret 6, 7 and 8.

To get you a bit further than the Bb blues, here are the six most common shell voicings for jazz guitarists. In summary, they are covering the three main chord qualities (major, minor and dominant) and have either the root on the 6th string or the 5th string. This is not shown in the video.

Comp those chords left to right, and you have a basic way to play on the II-V-I progression in C major. Neat, uh? Caveat #2 = What about minor7b5 (a.k.a. m7b5 a.k.a. half-diminished) chords? Simply use the m7 chord shapes. Reason: there's no fifth degree of the chord contained within the shells.

Grab a lead sheet now, and start playing chords to known tunes with only shell voicings. But first, simplify the extensions. When (or if) the sheet music has chords with extensions, simplify everything down to the 7th. 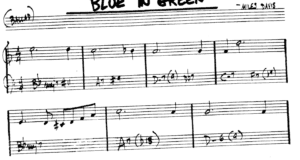 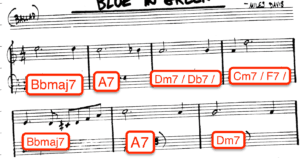 If you want to take your shells a bit further, without learning anything new, I highly recommend you go rootless. You've read that right!

So go ahead and re-do the process on the Bb blues, and on standards of your choice, but now completely remove the lowest note of the shell voicings. You will be left with the 3rd and 7th of each chord, laying nicely on strings 4 and 3.

Of course, this works even better if you're even more adventurous and want to start adding some extensions on the top two strings. As shown below. ;-)

Extensions for the Shells: Basics

And, for dessert, here's a basic method to perk up the II-V-I in C major when comping with shells. Let's start using chord extensions.

Extensions are defined as anything above the 7th, so the 9th, 11th and 13th degrees of chords are considered extensions. Notice that extensions can be altered to be flat or sharp. We won't address this now, since there's a whole science to adding extensions to chords, but I'm sure you've seen chords such as E7#9 and G7b13 in your musical life!