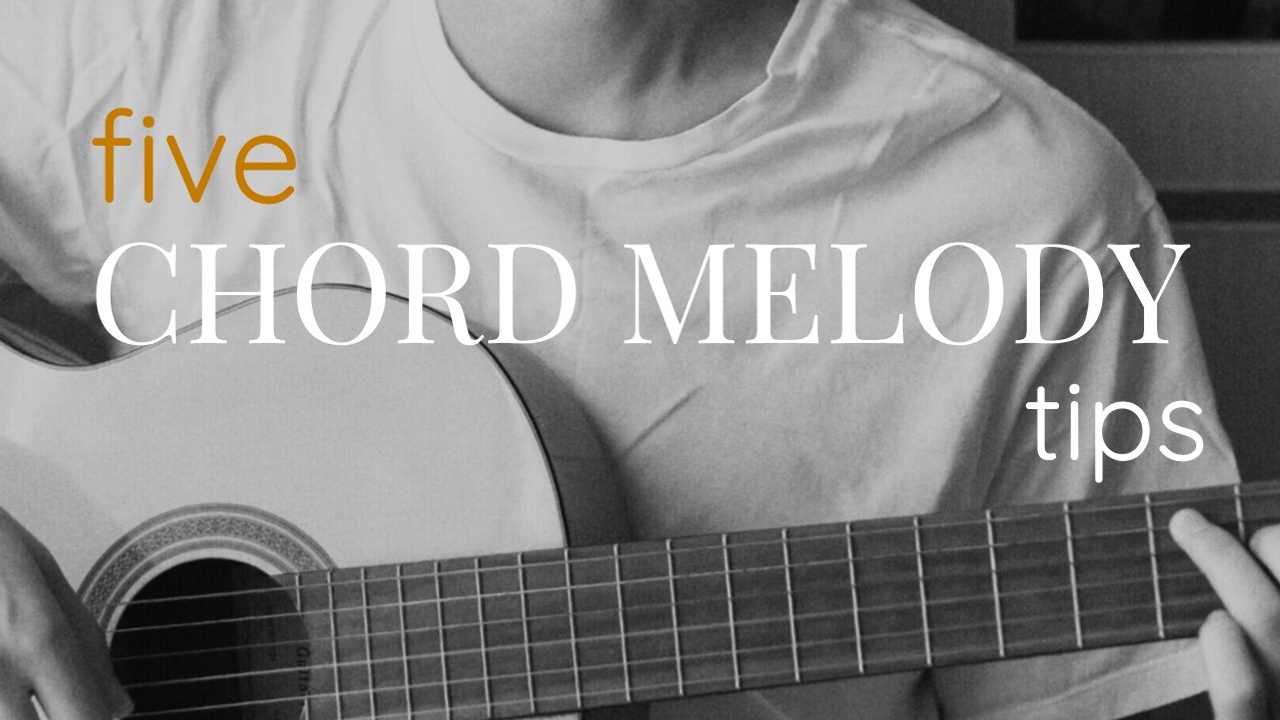 Here's a straightforward and easy-to-apply lesson to perk up your chord melody playing. Here are five tips for jazz guitarists of all levels regarding the fine art (and science) of playing harmony and melody simultaneously on the guitar.

The Pain Points: In Summary

Problem #1: Your chord melody sounds like just a "bunch of chords" one after another.

Solution: Make the melody a priority. Phrase the melody like you would sing it, then add chords later.

Problem #2: You don't know what chords to use to create your own chord melodies.

So, basically, in this lesson, I'll give you many take-homes in terms of building your own chord melody arrangements on standards tunes. With these five tips, you'll be better prepared to face the real jazz world. If there is such a thing.

Here is the PDF file  for the chord melody arrangement exercises in this lesson.

First things first: as you might be aware of, playing chord melody style is...

To play the melody and play the harmony at the same time on the guitar.

Chord melody is often perceived as being the ultimate expression for jazz guitarists. So let's see how we can make your chord melody chops better with some of these tips. We'll use the beginning to the jazz standard tune Body and Soul to demonstrate several examples, so let's get going.

Tips, in order of appearance:

Chord melody tip number one is all about the melody. You should let the melody come first and let this jazz standard's melody dictate where the arrangement is going whenever you're playing chord melody style. It should be memorized of course (no looking at the sheet!)

Remember that it doesn't mean anything if you're just playing a bunch of chords, which is often what's happening when inexperienced players attempt chord melody style. I've heard several so-called jazz players simply pluck a bunch of chords and do a poor job at holding the melody together. You often hear those players on YouTube, phrasing the melody oddly while playing a chord solo guitar arrangement.

So, let's avoid that by really nailing down the melody to the piece we want to add chord melody stuff too! Easy, right? :-)

Our first example is just the melody to the first four bars of Body and Soul. We will maintain this phrasing and the idea that the melody is singable when we add chords underneath it. Please watch the video to hear how it can be phrased.

You get the idea, just memorize the tune, know the song you're about to play. That's it for the first tip. It shouldn't be overlooked!

Our second melody tip is simply to have the melody sustained as much as physically possible. In the video, you can hear the notes were fully sustained in the example above. We need to work hard on this skill since the guitar is more naturally a percussive, staccato instrument.

Here's why: very often, when we play a bunch of chords (and chord melodies aka chord solos) we let go of the finger that plays the melody too fast because we want to get to the next chord in time. As a result, we get this staccato feeling instead of it being either smooth or legato.

Sustain and/or legato are things you might want to focus on. And that's why you might see "Hold Notes Down" written under the staff of several method books. We have to fight this staccato tendency. Think Ted Greene style of playing. It's well worth the effort!

The other thing, the last thing in terms of melody, is not to overdo it when adding chords. For example, whatever you do, whatever you build as chord melody arrangement on jazz standards ask yourself:

"Does this contain too many chords if I try to play in tempo? Is it too hard, is it too difficult?"

Let's look at example two now, where the chord melody contains too many chords:

At first, this might sound like it's not too bad and it's cool. But when I would come up to a jam session and try to play this tune I would never be able to play all these chords in time... There should be a point where you don't play any chords to let the chord melody breathe a little.

Not only is it impossible to play everything all the time, but musically, it is also desirable that you pause the motion of harmony.

More specifically, the first thing you've got to do is to understand the relationship between the melody and the harmony in the jazz standards that you're playing. In other words, use scale degree analysis to every melody note. Let's look at example three now.

The number in between brackets in little boxes, and what they describe is the relationship to the melody notes. So basically, we ask ourselves "How does that note relate to the current chord?"

So looking at the first three notes of the melody on Body and Soul (Eb to F back to Eb) on a Ebm7 chord. The analysis is 1 to 9 to 1. See if you can run this analysis for the entire song.

As a side note, I found that sometimes people know way too much about music theory. They know all their scales but they can't really play on tunes. On the other end of the spectrum, I have students who are fabulous, incredible players by ear and they don't really understand what we're doing.

We strike a balance by understanding the barebone minimum. What's the relationship between the tone that you're playing the melody note up high and the root note? This is something invaluable when you come to build your own chord melody or understand what's up with the tune.

The second harmonic tip I wanted to give you is, as much as possible, you should separate your harmony and not play chord melody as "one big thing". The second example above (where it's "too much") demonstrates how NOT to do it: everything is played at once. Every melody note is played simultaneously as a chord ... and that's bad news!

How about this for a solution: strike a chord before/after the melody note you want to harmonize.

Chord melody is not "one big thing" where we use a formula to play a chord under a melody. Chord melody should be a compliment to the melody of the song. The melody comes first, like with the right hand of a piano player, and the left hand is accompanying the melody with chords. It's like doing two things at once, and not just one big "chunk chunk chunk ...." of things with chords on the guitar.

Lastly, what I wanted to discuss in terms of harmony is to rework the same tunes as your understanding of harmony evolves. You'll be able to play more and more beautiful chord melody stuff.

For instance, if we look at example four, this would be how I have harmonized and chord melodize Body and Soul when I first got to the first time. I was young and foolish:

Boring chords, very simple straightforward thing. There's not a chord under each note. It's just simple. Now, from my perspective (having been playing Body and Soul for over 10 years), I find the example above too basic and simple. My ears crave more advanced, interesting chords and ideas.

So in example five below, you'll see a more evolved style of chord melody. This is something I would have played (say) a year or two later after example four. It's my understanding of the instrument, the harmony, and the song that has evolved ... and it allowed me to play a better brand of chord melody.

So, the lesson here is: re-use your very same chord melody and keep working on new shapes and new ideas, new arpeggios, and things. You can make it evolve as you evolve as a player.

Work on complete tunes by yourself. Work on entire jazz standards songs, thoroughly.

You and I would not play the chord melody in the same way ... and you have to develop your own style. Just take a new song and do it yourself with whatever you have. It may sound like a major pain now, but the process is invaluable to your growth as a jazz player.

Let me tell you a bit about how I came to realize this idea. My personal story happened as I started to get lessons with a really great teacher in Montreal. He said

Then he said, "Okay, can you play Stella by Starlight? Can you play the melody?"

"Can you play the chords?" he asked.

I replied "Yeah," and played comping on Stella.

Then the teacher asked: "Can you play chord melody?"

I tried to play some stuff, and I'm like, "No, I cannot relate the melody and the chords together yet."

So he said, "All right fine, work on the chord melody on your own this week."

I worked on the full tune and a week later, I got my own personal chord melody arrangement on Stella by Starlight. It sucked. So in the following lesson, the teacher said, "Oh right, that's good, but here in bar five remove that chord, put this instead. Over here you played too many chords together, I can not hear the melody," and on and on. The process was hard and rewarding.

We worked like this over several weeks (rewriting the chord melody I had first created) up until the point where I got my own personal way to play Stella by Starlight, which I still play to this day. Of course I'm still modifying it as I learn new ideas and harmony. But that's the gist of it. That's my personal story. You get to a point where you formalize what you put in a tune enough to the point where you can walk into a jam session and just play that tune. That's the takeaway here. :-)

On to tip number four about chord melody which is to play by ear. Use the sound, or play by sound basically.

Your ears are always the final judge if it sounds good or not.

So to make this happen, record yourself. Take a small recorder or your phone, play your chord melody. This is the greatest way to gain perspective on your own playing. Listen to your recording critically. Don't be too hard on yourself, but still analyze what you're doing well (and not so well).

The danger if you don't take the time to record yourself and analyze (with your ears) is winding up just playing a bunch of chords. As I warned at the beginning, you play chords, one chord underneath every melody and it doesn't sound like anything after a while.

Of course, you can steal ideas from great players. For me, it was Ed Bickert, Ted Greene, Barry Galbraith. I got tons of great, not only voicings, but great ideas of how to solve the puzzle, how to manage to play the melody and the chords at the same time.

These three books are eye-opening and great for your technique. Always keep striving to find new voicings and new ways to approach the chord melody problem on the guitar, and you'll always get better.

Our five tips in point form: