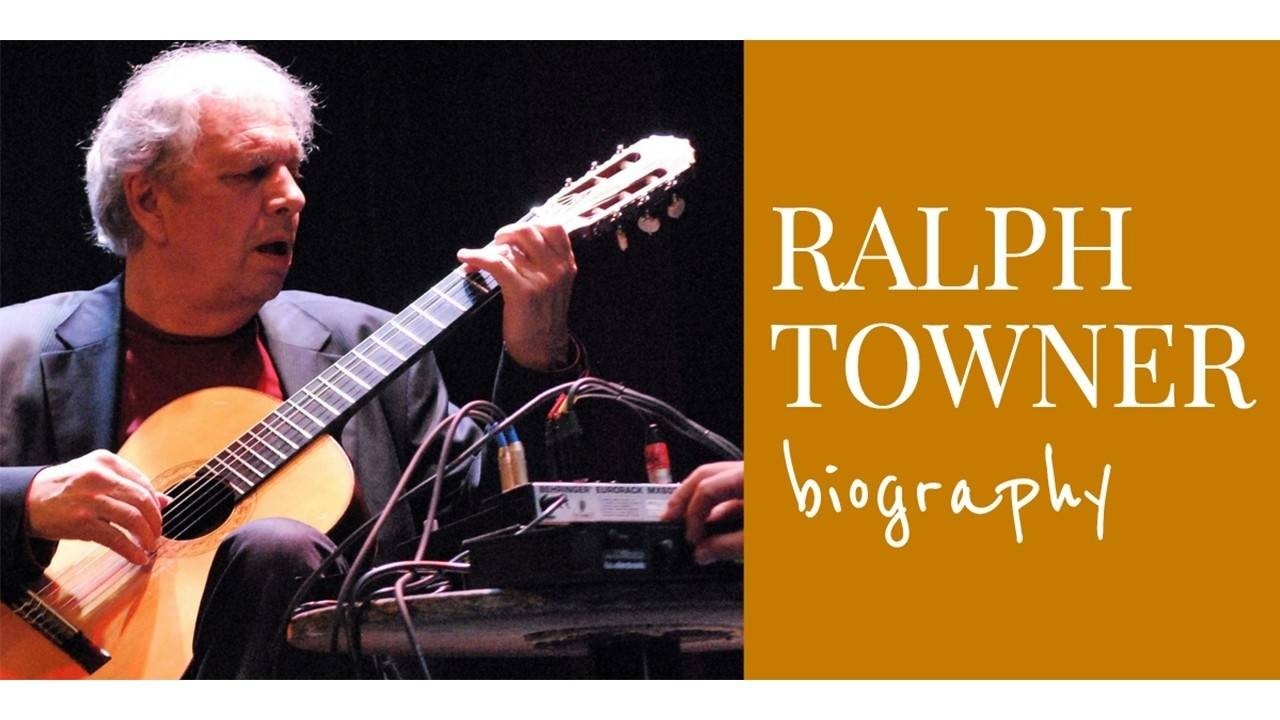 Ralph Towner is a guitarist and composer known for his organic fusion of jazz and classical music. He performs primarily on classical and 12 string guitars, and is also an accomplished pianist.

Towner established himself as a mainstay of the ECM record label, both as a solo artist and with the group Oregon. He has performed with Gary Burton, Gary Peacock, Charlie Haden, John Abercrombie, Weather Report, and countless others.

Ralph Towner was born in Chehalis, Washington, in 1940. His first experience with music was at age 3, improvising on the family piano.

Towner's parents were musicians; his father played trumpet and his mother played piano. As a child, he became proficient on both of these instruments, and was able to imitate the piano styles of Fats Domino and Little Richard by the time he reached high school.

It wasn't until his time at the University of Oregon that Towner stumbled upon the classical guitar. Although it was initially an impulse purchase, Towner became fascinated with the instrument's potential as for subtlety, describing it as "a little keyboard".

During this time, he also immersed himself in the early work of Bill Evans, which became his main musical inspiration.

Fully devoting himself to the guitar, Towner moved to Vienna in 1960 to study with classical virtuoso Karl Scheit. There, he practised for 10 hours each day, determined to catch up for what he deemed his "late start".

In 1968, Towner relocated to New York where he joined a vibrant jazz community. He supported himself by playing lounge gigs on piano, all the while developing his unique jazz/classical guitar style.

Eventually he found work as a guitarist as a member of the Paul Winter Consort. This group was known for blending jazz and classical music, often with a nature-tinged aesthetic.

Paul Winter owned a Guild 12-string guitar that he insisted Towner learn to play for the group. Although he was initially put off by the steel strings, Towner adapted his right hand technique to suit the spacing of the two-string courses.

He has since become deeply affiliated with the instrument, and can even be heard playing it on the Weather Report recording The Moors.

It was in the Paul Winter Consort that Towner began working with Paul McCandless, Glen Moore, and Collin Walcott, with whom he would form the group Oregon. Oregon became known their fusion of jazz and classical music, with a heavy focus on improvisation and use of non-Western instruments.

Although it is a co-operative group with no clear bandleader, Towner writes the majority of the group's material. Paul McCandless has said, "I always feel I know where to go with his music. Like Duke Ellington, Ralph can put a musician’s name on the part".

The musicians of Oregon became stalwarts of ECM record label, starting with Towner's 1972 ECM debut, Trios/Solos. Towner followed this up with a series of acclaimed, boundary-breaking recordings including Matchbook (with Gary Burton, 1975), Solstice (1975), and Solo Concert (1980).

Through these recordings and live performances, Towner established himself as one of the premiere forward-thinking jazz guitarists. Aside from Oregon, he has also played with John Abercrombie, Gary Peacock, Larry Coryell, Keith Jarrett, Charlie Haden, as well as countless solo performances.

In the 1990s Towner moved to Italy with his wife, where he still resides today. These days, he remains active, recently releasing Chiaroscuro (with trumpeter Paolo Fresu) and My Foolish Heart, a solo guitar record in homage to his early hero, Bill Evans.

"I always feel I know where to go with his music. Like Duke Ellington, Ralph can put a musician’s name on the part."

"All I did was play there in this tiny little room, with snow blowing in the window. I was eating next to nothing. I practised up to 10 hours a day, seven days a week for nine months straight."

"Real music isn’t about power. It’s not about trying to get famous or popular. If those are your goals, they’re completely contrary to the art of making music."

Svíčková [image in header] is licensed by CC BY-SA 3.0