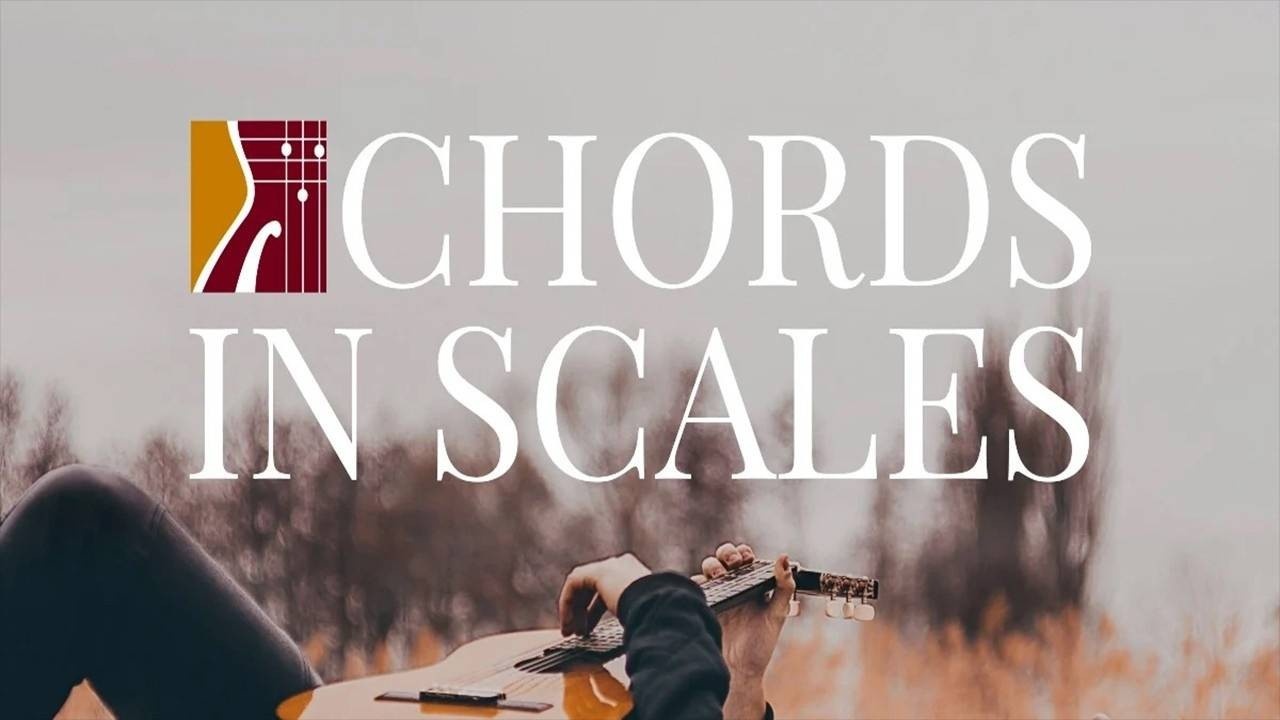 After you learn the basic jazz guitar chords, the next step is learning how they relate to the most commonly used scales in jazz.

For anyone taking theory notes, this is called learning the diatonic chords of the scales! ✍️

Diatonic chords are the chords that naturally exist within each scale by stacking their respective notes, most commonly by the interval of a third.

With me so far? If so, read on to learn how to derive chords from scales, plus appropriate guitar fingerings for each.

Quick note before we start: this is basically the continuation of the other basic jazz guitar chord lessons found on this website. If you're new to this, go there first!

In this lesson we're going to deal with the most common "parent" scales in jazz: the major scale, melodic minor scale and harmonic minor scale.

These are the scales where the modes come from. That means that if you learn these, technically you'll know the diatonic chords for all of your favourite modes as well!

Click to get all examples in this "Jazz Guitar Chords In Scales" PDF!

Building Chords in Scales: The Theory

As we said earlier, we're going to stack thirds on each note of the scale to generate chords. Whether it's a major third or minor third depends on which note is available in the scale.

In jazz, the harmony is mostly seventh chords, which are 4-note chords. This means that we will have to stack 3 thirds to get each chord.

Here's what I mean! This is how you get the first chord of the C major scale:

Repeat this process for each scale degree, and you'll have all the diatonic chords of the scale!

We've gone ahead and done the brunt work for you here: 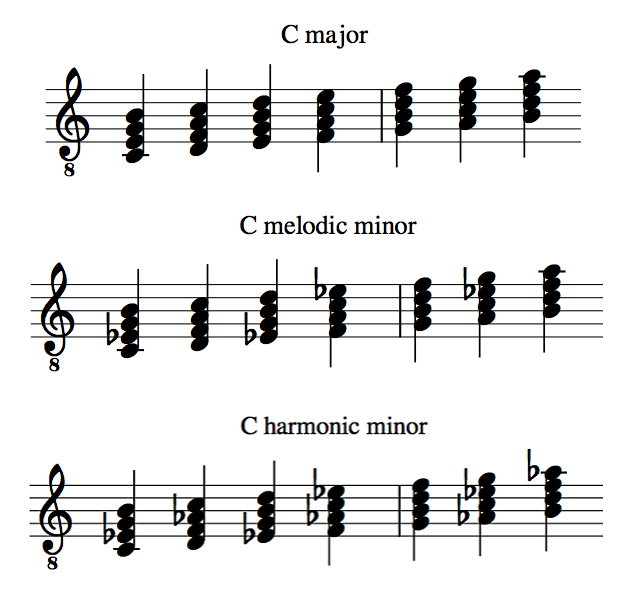 Now that you understand the theory behind this, let's get into what these chords are actually called and how to play them on guitar.

I wouldn't try to play the chords above - they involve crazy stretches! These are are closed voicings. We've left out the tab to avoid being sued by potentially injured readers 😅

The easiest way to play these chords on the guitar without risking injury is by using Drop 2 or Drop 3 voicings. To learn the theory behind those, please check out this related lesson.

If you don't understand the theory behind them right away, that's okay. Your main goal at this point should be to memorize the chord shapes, and the names for each chord.

Let's play the drop-2 chords in three scales (major, melodic minor and harmonic minor) in the key of C.

Don't forget to descend the scale also! See how to play chords in these jazz guitar chord charts in this video:

"Marc, what are some of those chords?! Major 7 sharp five??"

Aha! As you may have noticed, this approach brings up two new chord types that you may not have seen before:

Luckily, they are both only "one finger away" from a chord you probably already know. That is the good old major 7th (1 3 5 7)!

Look here to see the difference between the altered chord tones and the basic major 7 chord: Now that there's no confusion about those chords, let's play our diatonic chords with a second set of shapes!

So, let's play the drop-3 chords in the three scales (major, melodic minor and harmonic minor) but in the key of G (which makes more sense as a starting point for guitar).

Click to get all examples in this "Jazz Guitar Chords In Scales" PDF!

Don't forget to play these chord scales descending! (as in the video)

Transposing this to all 12 keys

For your reference, here are the chord types for each scale as Roman numerals. Use this to transpose to other keys!

To do this, play the corresponding chord type for each scale degree of whatever key you like.

Now we have the two basic voicing types to play diatonic chords! They sound good and are easy to play.

To take full advantage of this approach, I strongly suggest you go further than the written examples. You can cover more territory on your fretboard by using the following suggestions:

-1-
Use all the frets you have
Going further up or down on the fretboard in the same key until you reach the nut (or the bridge!!!) Meaning that you keep using the SAME set of 4 strings to play up and down the guitar. 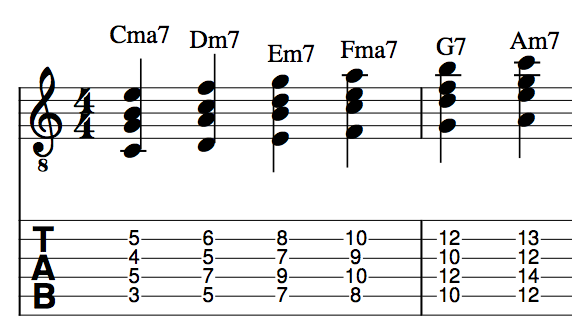 -2-
Use different sets of strings
Playing the same chords in the same order but varying the string sets. All the above examples are all "four chords per string set".

But, check this one out :

It could be qualified as a "six chords on one string set, then two chords on another".

Use your imagination and you'll find what works for you! (ie, decide when it's time to change string set when ascending or descending the chord-scales.)

Remember also that this whole process is applicable starting from any root on the guitar neck! Take the time to learn other keys on your fretboard! I repeat: LEARN OTHER KEYS! You'll be glad you did. :-)