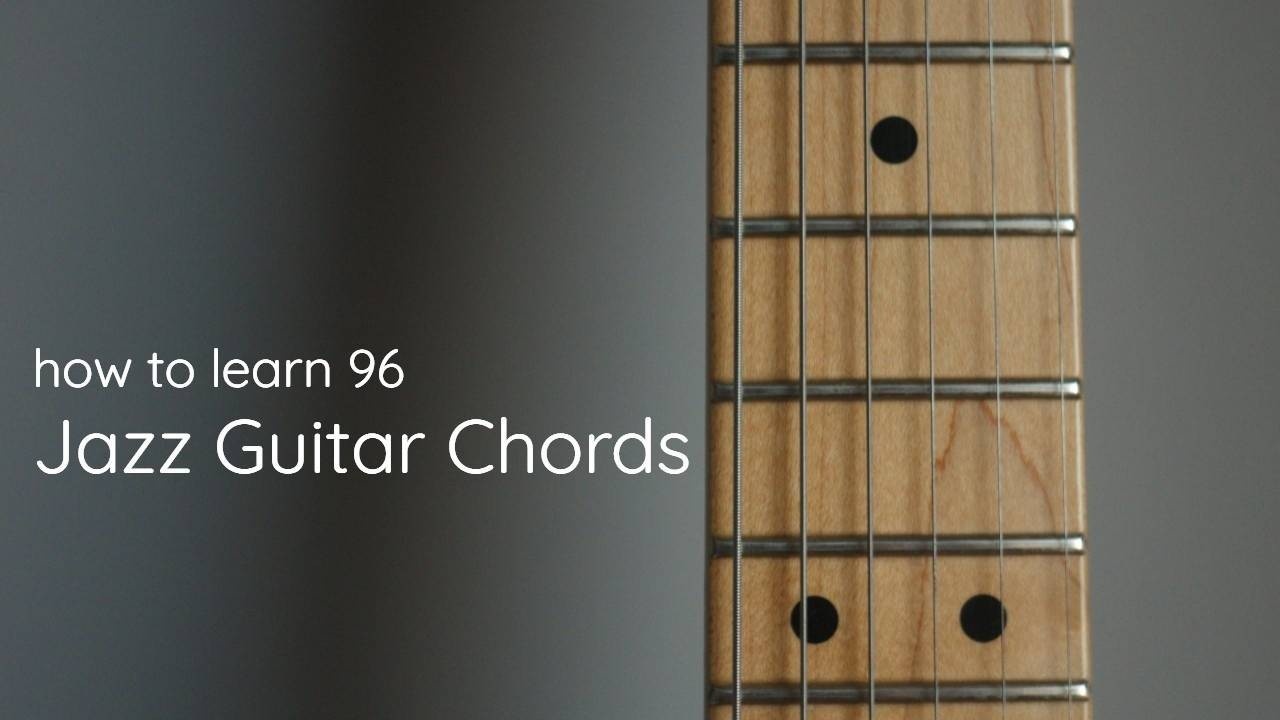 How to Learn 96 Jazz Guitar Voicings

A jazz guitar voicing is a specific arrangement of the notes of a chord. The most basic jazz guitar chord voicings are called Drop 2 and Drop 3.

These were used by guitarists like Wes Montgomery, Joe Pass, and countless others.

This lesson will teach you a straightforward way to learn 96 jazz guitar chords using a small handful of drop 2 and drop 3 voicings.

By the end, you'll have a ton of chords you can use for comping or chord melody, plus a way to practice them!

"That seems complicated! Where do I start?"

I'm glad you asked! Learn things in this order:

1. Learn the theory behind the voicing

I want to start by quickly talking about what drop 2 voicings are and they work well for jazz guitarists.

Take a look at this C major 7 chord that you would see in a generic jazz theory textbook: 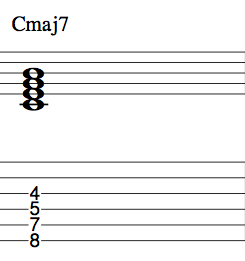 This is called a closed voicing. This is... not great for guitarists!

Just try to play that as a moveable shape - can you imagine having to stretch that far every time you needed to play a major 7 chord? 🤕

Much to the delight of hand surgeons everywhere, some brilliant soul invented drop voicings.

Drop 2 and 3 voicings are physically much easier to play on guitar.

To create a drop 2 voicing: 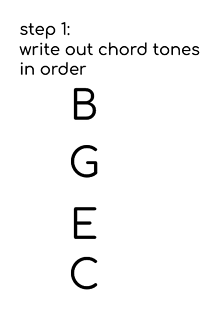 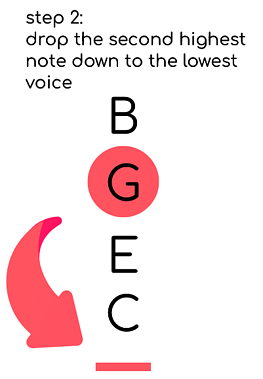 This changes the order of chord tones to: G C E B.

Now, let's try to play this chord on guitar: 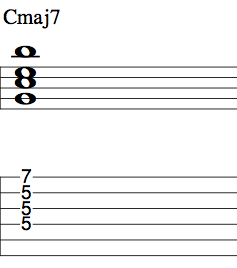 Much easier, right? This is the magic of drop 2. ✨ 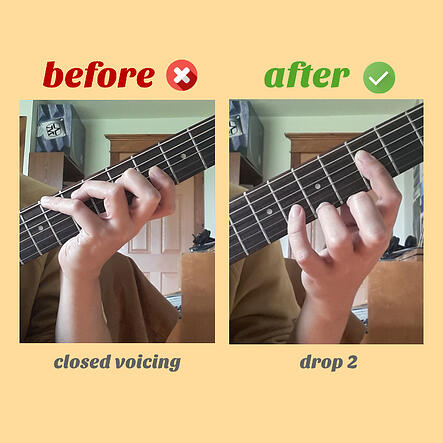 This is still a C major 7 chord, as all the chord tones are still present.

note: I don't actually recommend starting with this voicing - it's just the one that is best for understanding the theory.

So, to quickly recap:

Now that we understand what drop 2 voicings are and why we would want to use them, let's learn them on the guitar.

The first drop 2 shape I recommend learning is this standard Cmaj7 chord: 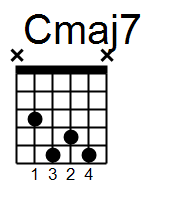 Take note of how the chord tones are arranged: C G B E. And believe it or not, that's all there is to it for this step!

3. Run the voicing through a scale

Here's where you can use this to generate quite a few jazz guitar chords.

What we're going to do is take the voicing that we learned in the previous step, and run it through the C major scale.

"Run it through the scale" means to take each note in the voicing and move it up to the next note in the scale.

Try it for yourself: 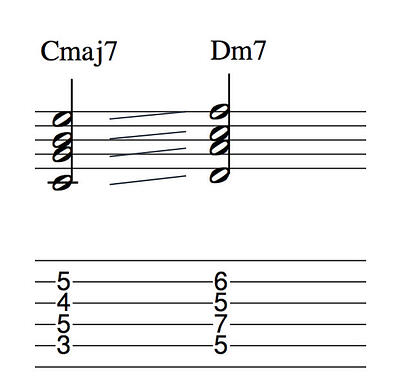 C major is a great key to try this in because there are no accidentals - simply move each note to the next letter in the alphabet.

Moving the notes in this way gives us a drop 2 voicing for a Dm7 chord. Now, let's continue this until we go through all the chords in the scale:

Here they are as moveable* chord diagrams: 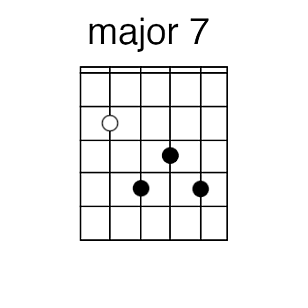 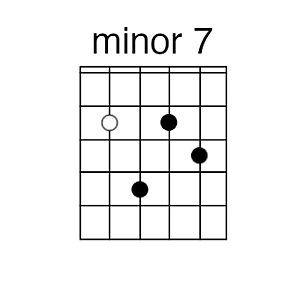 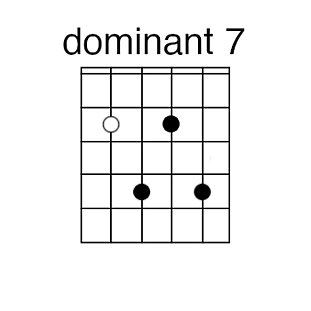 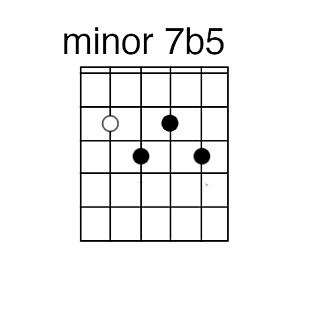 *white notes indicate the root of the chord

Because these are all moveable, you've technically learned 48 jazz guitar chords just by practicing this one chord scale! (4 chord types x 12 frets= 48)

To get the other 48 chords, we're going to apply the same techniques to a drop 3 voicing.

1. Learn the theory behind the voicing

As the name suggests, Drop 3 voicings are created by in a similar way to Drop 2 voicings.

To create a drop 3 voicing:

This might take some time to sink in if you're new to theory - if so, for now just think "the notes of the chord are rearranged".

(plus, it makes it easier to play!)

For our drop 3 exercise we're going to use a Gmaj7 chord (instead of Cmaj7 like we were using previously). Step 3 will be much easier this way 👍 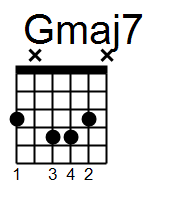 3. Run the voicing through a scale

Just like we did in the drop 2 section, what we're doing here is taking the voicing and running it through the major scale.

Again, this means that every note in the chord is moving up to the next note in the scale: 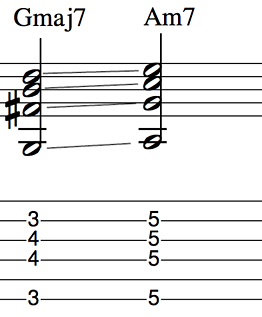 What that gives us is A G C E, which is a drop 3 Am7 chord. Repeat this until we've gone through the whole scale:

Here they are, written as chord diagrams: 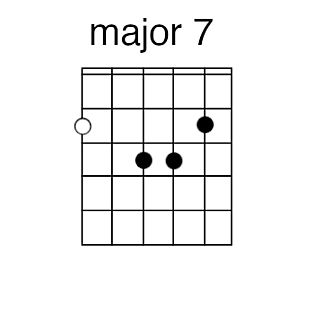 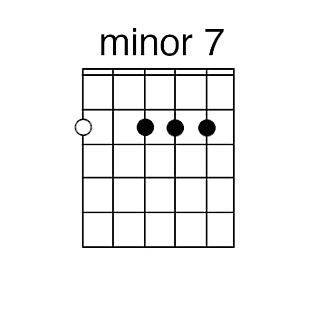 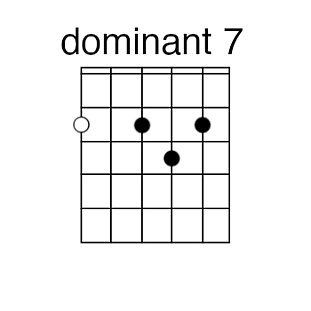 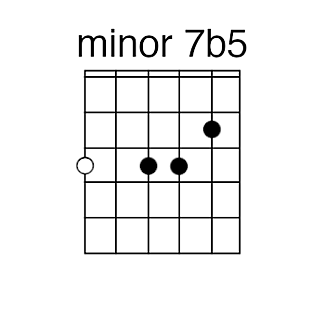 These are moveable shapes, with the root indicated by the white dot.

For example, to play a drop Bb7, use the dominant 7 shape above and make the root a Bb note.

Now you technically have 48 more chords at your disposal, just from practicing this one scale. (4 chord types x 12 frets = 48)

Combined with the 48 drop 2 voicings we learned earlier, we now have 96 jazz guitar chords that we can use for comping, chord melody, etc!

Spend some time especially on step 3 of each section here, and you'll memorize the moveable shapes in no time.

Once you get that down, challenge yourself with our drop 2 challenge and this big five warmup!

**Note from the editor** This post was updated on 2/18/2019 to improve quality and readability.