Here's a short blog + video lesson on easy drop 2 chords for jazz guitar beginners. Or, as I call it, "The Drop 2 Challenge".

Generally, when jazz guitarists comp (that is, when playing comping a.k.a chords acCOMPaniment), they don't always use barre chords. Or chords with the root in the bass for that matter. To gain more liberty, the intermediate players will gain lots of freedom by learning chord inversions.

The result is often flying around on the top four strings at a rate of two thousand chords per minute ... getting on everybody's nerves while comping! But don't worry: this phase lasts only about 10 years. Then you'll move on. ;-)

So, in this lesson, I want to introduce the most basic voice leading for drop 2 chords (also called voicings) on your top four strings on the guitar. And it strictly aimed towards beginners. If you're already familiar with drop 2 chords, inversions and voice leading, maybe you should do yourself a favor just read  The Advancing Guitarist (and move on with your life!)

I want to point out that I call this a challenge because in total there's twenty-eight voicings, so if you learn one of those a day, in a month you'll have mastered this. So take up the challenge, and write it down in your personal calendar. Take four weeks, use the exercises below and you'll never play jazz guitar comping the same!

Drop 2 Chords: Not so Fast!

Get the PDF for this lesson here, it contains the 28 drop 2 voicings (including TABS) you will need to take up the challenge. Did I mention the TABS are included? :-)

The first voicing you want to be learning is C major 7, like this here.

Your job is to look at the PDF and just learn the diatonic chords descending through the cycle of fourths. In C major. Easy, right?! ;-)

First, there's two types of cycling. Your basic cycle of fourths cycle from C, F, Bb, Eb etc. This is what we can call "chromatic cycling", because we'll wind up covering the 12 notes with this cycle.

What we are more interested in for this lesson is diatonic cycling. It means, basically, that we cycle only the notes that pertains to a key. So, our key now is C major, and the notes in that key are C, D, E, F, G, A and B.

Practicing the diatonic cycle of fourths in C major: Version 1

How to Practice Drop 2 Chords

Easy! Your job is to play the voicings and name them. Once you run out of frets, take it up twelve frets up, an octave, and keep going down, all good?

Then you start over cycling from C major, but with that different inversion of the same chord as your starting point.

Yes ... for instance, those three notes: C E G, can be inverted like this E G C. The former is a C major triad, the latter is still a C major triad in what we call first inversion.

So for any 4-note drop voicing, you can play 4 inversions of that same chord. Any of the four notes can be lowest note (and that's how we qualify the inversions), hence 4 possibilities only. Please do not mix up voicing and inversion.

The inversions are simply giving you one more information: which note is lowest.

The above can bring about lots of confusion, so just make sure you read it out loud a few times before moving on. :-)

So, back to the example, the chord we started with in the PDF is C-G-B-E (C major 7). The second sequence of chords start with C major as G-C-E-B (played like this: xx5557). Both are different inversions of a drop 2 voicing. 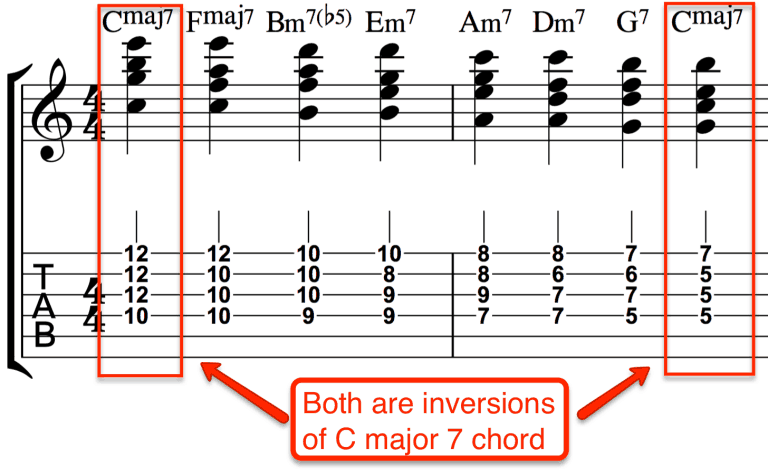 For now, I would insist on you *playing* that stuff really well on your guitar fretboard. Try to sound exactly the same as I did in the video above. Don't let the "puzzle" of the harmony (and theory) intimidate you. First walk the walk ... then we'll talk the talk in the theory section here.

Then of course, for geeks, there's more theory right below. :-)

The exercise in this PDF/video lesson is in "perfect" voice leading, because every note moves to the closest available note in the next chord.

Or, another way to express this, in this case, is that we have two notes moving, and two notes staying the same when we change chord. 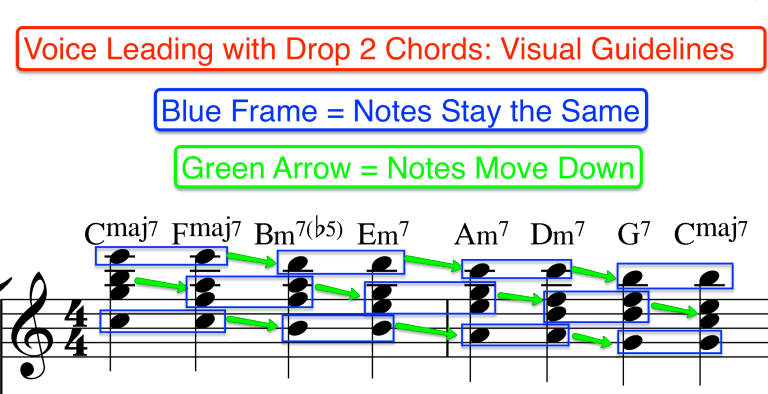 Notice, if the "outside" voices move (top and bottom), then the "inside" voices stay the same. And vice versa.

There's a lot more where this came from, and possibly an entire online course on the subject of drop 2 chords, so I'll keep you posted! Thanks! :-)

One of our readers, Vasja Jurkas, has graciously allowed us to post his study on drop 2 and drop 3 chords as well!

We find that this is a great comprehensive take on practicing these shapes.