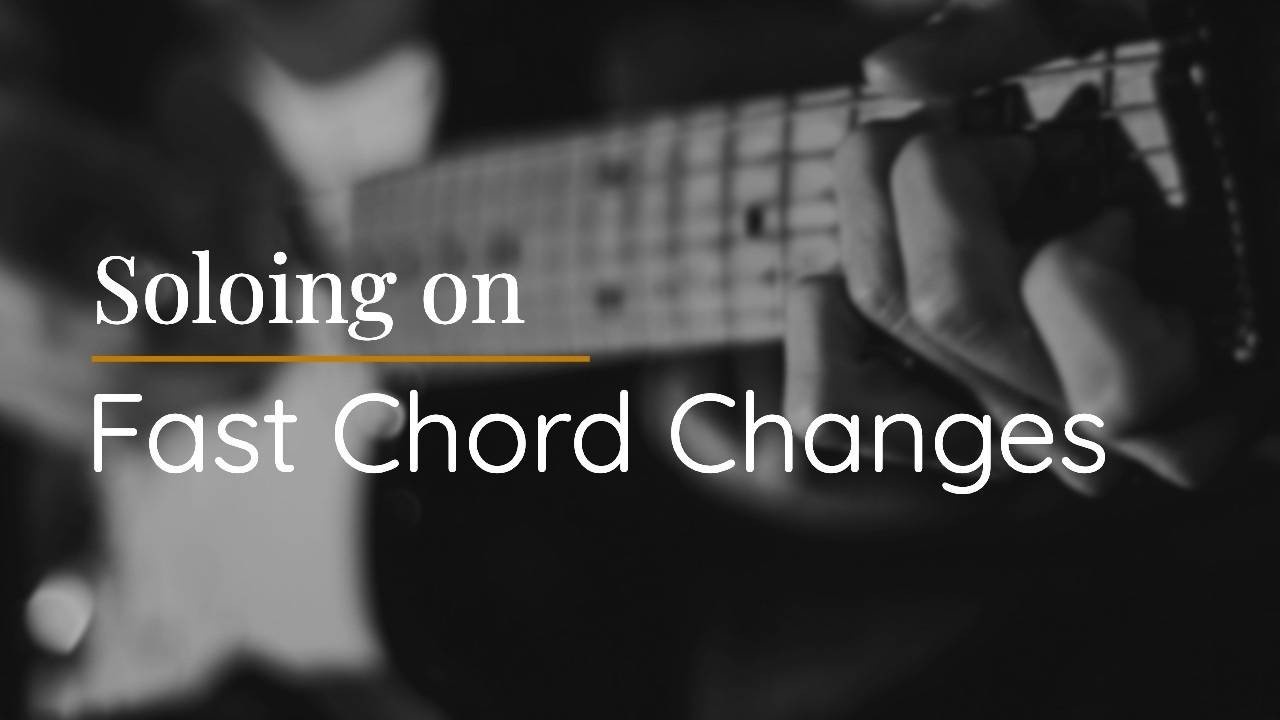 How To Solo On Fast Chord Changes

A few weeks ago we published a blog post titled "Soloing on Static Chords", all about what to do when you have to solo over long one-chord sections.

But what happens in the opposite case - when you have a flurry of difficult chords to solo on in just 2-4 bars? ⏳

I'm sure we've all been surprised by progressions like this at a jam or sight-reading a tune. It even famously happened to Tommy Flanagan when recording Giant Steps!

This post will provide a step-by-step method to help you master improvising over those tough fast changes. Let's dive in!

How to use this lesson

Throughout this lesson we'll be using the famous Tadd Dameron turnaround as our example. Check out this podcast #43 here for some more background info on this turnaround!

To get the most out of this post be sure to open the accompanying video in a new tab and also download/print off the PDF with all examples.

Download your "How To Solo On Fast Chord Changes" PDF!

What is a Tadd Dameron Turnaround? 2:20

Tadd Dameron was an influential pianist and composer, with a particular affinity for major 7 chords. If you've played his tune Ladybird, you'll know what I mean!

The turnaround for Ladybird consists of four major 7 chords:

This has become known as the Tadd Dameron turnaround. It's a... tad difficult for the uninitiated because you must switch scales on a dime. A different one for each chord!

What scales should you use?

We'll do the same on Ebmaj7 and Abmaj7 - just use the accompanying major scale.

The only outlier is our Dbmaj7, where we'll use Db Lydian.

Luckily, Db Lydian contains the exact same notes as Ab major. So you don't have to learn a different scale shape, just shift how you see the roots (shown in green here).

The main reason for lydian in this case, rather than the typical major scale, is so that we can keep G as one of our note options.

G is a really useful note because as you may have noticed, it's in every one of the scales!

Now that we have the scales straightened out, let's get to our first step! What we're going to do is take the progression and blow it up so that every chord last for four bars.

"Isn't this cheating?", you might be thinking. Well, if you put it that way... all practice is technically cheating! 😎

Make sure you go to 6:27 to play along with me! Much easier this way, right?

If you're having trouble with this step, you might need to practice the scales a bit more first, so you can visualize them on the fretboard instantly. Take it slow!

It's key that you don't move on from this step until you're comfortable. When I say step by step... I really mean it for this one.

Now that we've mastered four pars per chord, let's cut it in half. Two bars each!

See where this is going? It's a Russian nesting doll kind of situation.

This is already quite a bit harder! If you're having trouble, try thinking of target notes. Start by landing on the thirds of the chords.

Here's what I mean: 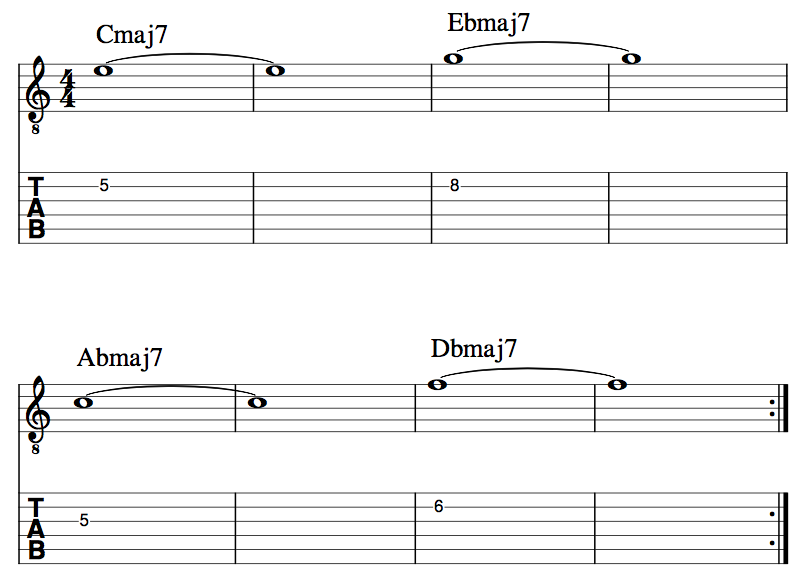 Then, once you can hear and visualize the thirds, try approaching them with some notes from the scales. For example: 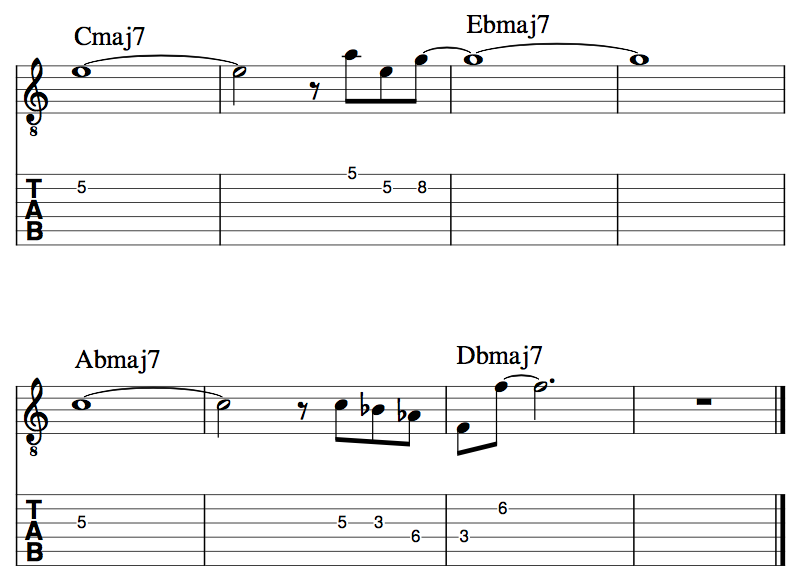 Congrats on getting this far! Now we're going to cut things in half again... one bar per chord.

Just remember, you don't need to play Pat Martino-esque sixteenth notes over this stuff. It's perfectly valid to use quarter notes or half notes, and work your way up. 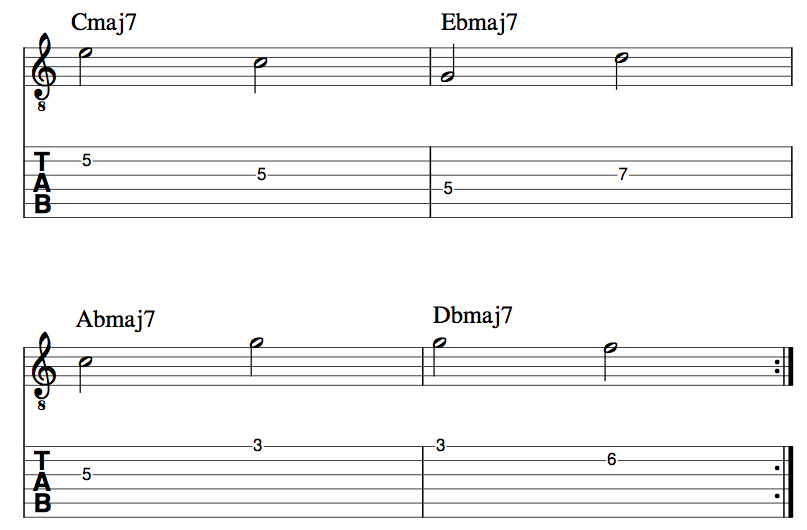 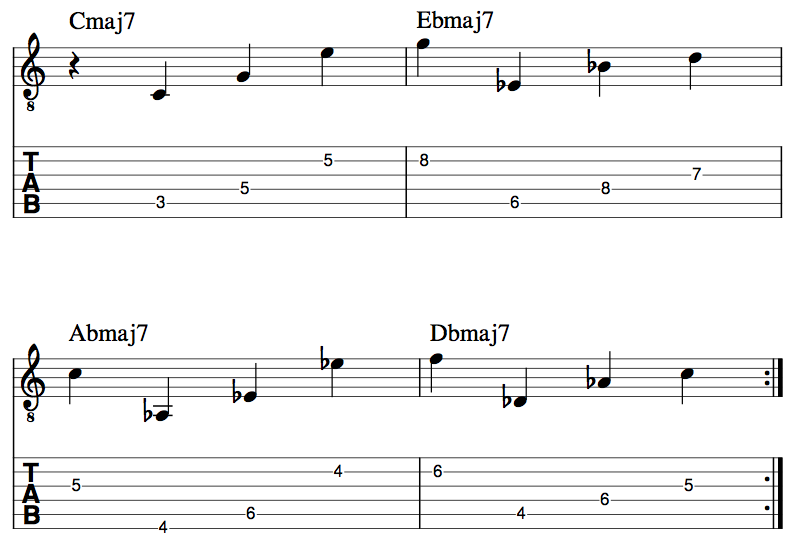 You'll notice that this line has some large leaps in it.

A little trick - if you're simplifying one aspect of your lines (ie. rhythm), try making another aspect more interesting to compensate.

Now we've reached the final showdown! Half a bar per chord, just as Tadd Dameron intended it.

Here's a thought, courtesy of the great Wayne Shorter.

Try to think: "what notes do each chord have in common?"

This is a much more organic way to go about soloing over fast changes. Now if only I could sound as good as Wayne 😜

Here's an example you could try, thinking of G C and D as a common tones in each scale.

Download your "How To Solo On Fast Chord Changes" PDF!

To conclude things lets just go over the essentials!

To practice soloing on fast chord changes, increase the amount of time on each chord to make things easier. Then, slowly work your way back to the original harmonic rhythm.

Some prompts you could use to generate lines would be:

This lesson is written for the Tadd Dameron turnaround, but it could apply to any set of fast changes. Try it on Giant Steps, 26-2, Donna Lee... you get the idea.