In this first jazz guitar tip blog post and video lesson, let's address something crucial for jazz guitarists: knowing the names of the notes on the entire instrument. In short, today's jazz guitar tip is learn the fretboard! You'll be glad you did.

Let first see why (hey, I need to justify what we're doing here!) and shortly after how (a technique) you can apply. Simple steps to learn the fretboard thoroughly, without too much memorization.

Learn the Fretboard: WHY?

I always like to use the piano analogy: if we were to ask a keyboard player

"what was that note that you just played?"

... we can be assured that there would be no hesitation in delivering the answer. "That note is F#."

If you are a serious musician and expect to play jazz (and jazz guitar) on a high level, it is expected that you know all the notes on the instrument. Not only for the heck of it, but for the new possibilities it offers you, and also for a deeper understanding of melody and harmony.

I did not say anything about reading music! That's another discussion altogether...

You see, not only will you gain the knowledge of the note locations on the fretboard, but you will also have a new found freedom. The freedom NOT to rely on shapes so much in the future ...

Here's an example (taken directly from the video above): if you were improvising around fret 7 on the guitar and I asked on to stop immediately and start soloing in the key of Db major, you would most likely try to seek some sort of visual shape on the guitar to do so. Knowing your fretboard (completely) will have you rely LESS on these shapes and more on sounds and notes.

Here's my personal favorite way (which is the concept I highly recommend for players of all levels): play notes horizontally on the guitar when attempting to learn the notes. It's so simple, often people wonder why they missed the idea altogether. 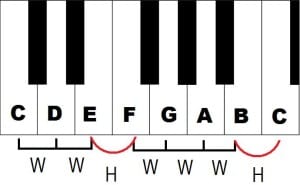 For instance, take only one string and play the C major scale up and down (see video). It forces you to think of the distance in between each note. It also enables you to really hear watchy'all doing: go up and the pitch gets higher. Come back down the pitch gets lower. A no brainer really! :-)

Once you grasp the idea, there's a ton of things you can do with it. One of the first steps (for me) was to start improvising on a simple major triad (think C "cowboy chord") using one string. I first did this in C major on individual strings (about 2-3- minutes each). You'd be amazed at the kinds of musical ideas you can hear ... or the ones that you don't hear! [Laughs]

As you progress with the "unitar" (an instrument that has only one string), you can start to play in different keys (major at first), on different modes, using intervals, or even using string combinations. (There's more, but I'll give you the immense pleasure of discovering that for yourself).

For advanced players: how about challenging yourself to improvise on a good ol' blues using only one string? or perhaps another chord progression? or how about string combinations? Try adjacent strings at first (to better hear and see intervals) and later on use non-adjacent strings ala Jim Hall. You're in for a ride! ;-)