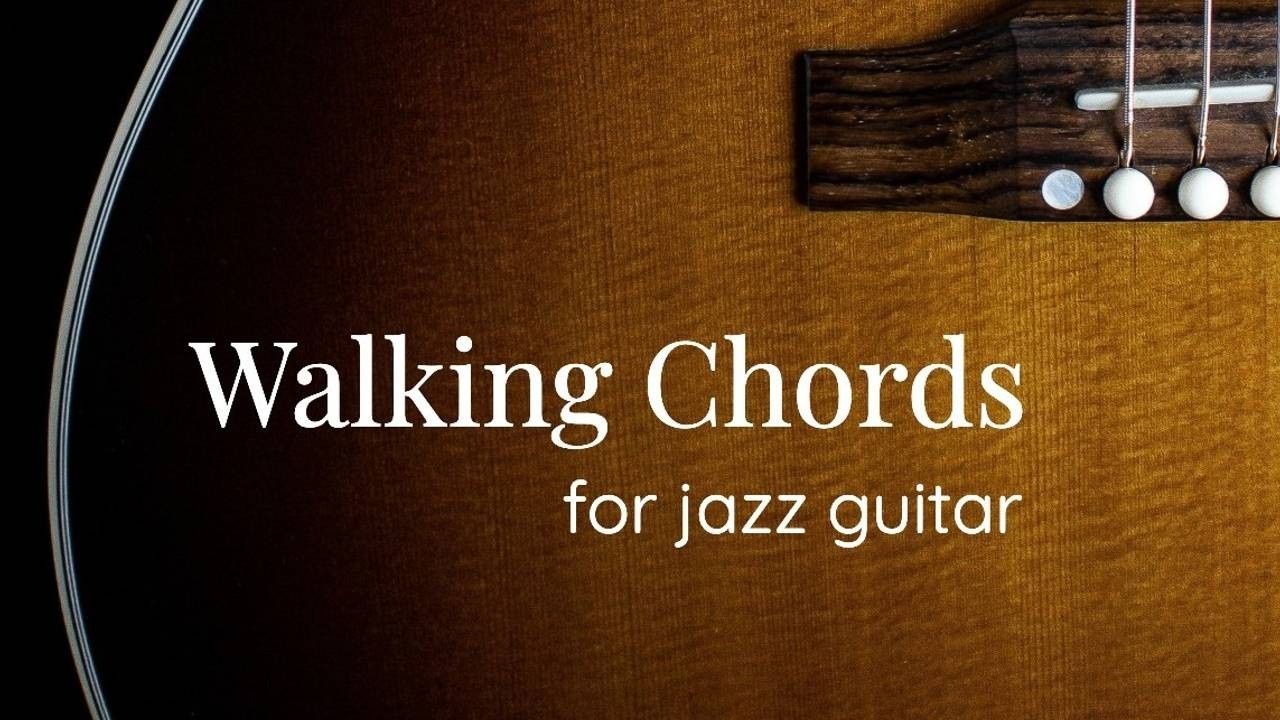 How to Use Passing and Diminished Chords for Walking Dominants

Move Between Chords by "Walking"

Walking chords are to jazz guitar comping what walking bass is to a bass line. The focus of this lesson will be to play chords in a “walking” fashion on the fretboard. I'm not talking about walking bass lines with added chords here. Rather, it's closer to something jazz pianists commonly do (hear how Monk does it). We'll use diminished and passing chords to "fill in the gaps" without disturbing the harmonic integrity of the tune.

Walking is basically the art of moving a voicing from root position to its first inversion using different devices such as passing and diminished chords. The result is a series of jazz guitar chords played with quarter notes in a “walking fashion,” using smooth voice leading.

In this lesson, we'll see how this applies to dominant chords (you could apply this on the blues, wink wink!). Then, in the next installment, we’ll look at how to apply this concept more generally via diatonic chords in a major key.

Get all exercises in this lesson in one convenient PDF here:

The idea behind the “walking chord” concept is simple: you want to get from root position to first inversion by using only three-note voicings, while still using the same string set.

For instance, on a C7 chord, you want to go from the first chord (root position) to the second chord (first inversion), such as in the example below. (If you're not familiar with those pesky three-note chords, go ahead and see this post about shell voicings here ...)

Connecting: Between Root and First Inversion 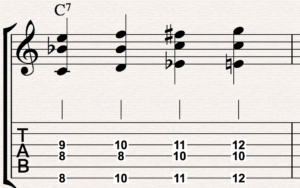 See? Now you don't have to stay on the same voicing for four beats!

Let's talk briefly about where those two new chords came from.

The second chord in the bar, D-Bb-F, comes from the diatonic key (it's a Bb major chord in first inversion, and lives in the realm of C Mixolydian).

The third chord, Eb-C-F#, is a passing diminished chord. It can be labelled as either #IIdim7 (ascending), or as bIIIdim7 (descending) - it depends on which direction you're going. Diminished chords are often used as passing chords because they have so much tension waiting to be resolved.

Now you can take these same voicings and play them on a different string set. In this example, we've put the root on the 5th string. Being able to play all over the neck is a cornerstone of being a good guitarist. ;) 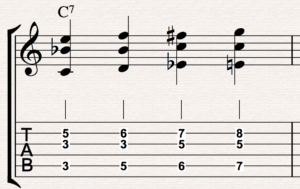 Cycle of Fourths Exercise with Passing and Diminished Chords

As an exercise, you can use the cycle of fourths to connect these dominant 7th chords. Go very slow at first, and make sure you play steady, groovy quarter-notes when connecting these chords on the fretboard. At first, stick to the same fingerings and same string set before expanding the exercise from there.

It's good to start these voicings low on the fingerboard and then move up the neck until you run out of frets. For example, start with an F7 with a 6th string root:

You could also start with a Bb7 with a 5th string root, as demonstrated in this example:

Here are all 12 keys of the dominant cycle written out across the neck.

This one is trickier because you have to switch string sets every bar, so go slow. This may look tricky, but it is an extremely rewarding exercise for guitarists to work out in the woodshed. 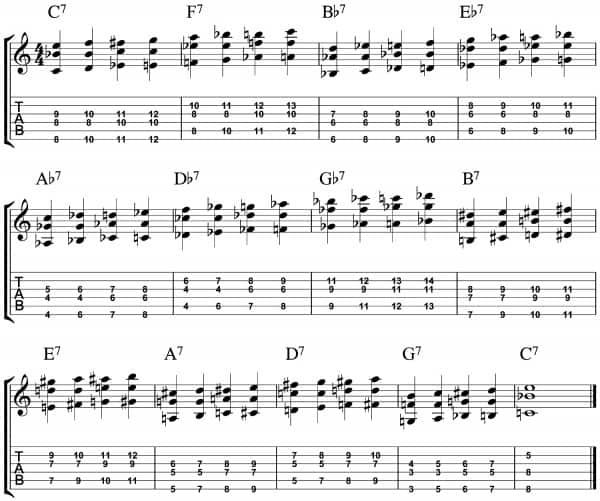 Notice that you can decide to switch string sets whenever you wish to build variation into the exercise. Try it out and see how it sits under your fingers. This exercise will show how well you really know the voicings and the chord sequence in different areas of the fretboard. If you realize you're lacking in that area, you could always check out the guide on scale positions, which is sure to help with that.

Once you master the cycle of fourths, you might be wondering: how do I know when to change string sets when I'm using this for real? The answer is two-fold. The main advantage of sticking to the same string set is smooth chord transitions. For example, if you are going from C7 to F7, the first inversion of C7 leads directly into F7. This is because the E in the bass of the first inversion of C7 leads directly into the root note of F7. However, these transitions are unfortunately not always possible. If you always stick to the same set of strings, you'll quickly run out of frets! So, when deciding whether or not to switch strings sets, consider what chord you have to play next and if you'll have enough frets to get there smoothly.

Get all exercises in this lesson in one convenient PDF here:

Get Some Practice in with Blue Monk!

Looking for some more examples? I encourage you to check out the chord melody arrangement of Blue Monk which you by clicking the picture below. It utilizes many of these concepts and will help you put them into practice right away!

Lastly, you'll want to start thinking of your other favourite standards where passing chords might be helpful for "filling in the gaps". This might include your favourite blues, or the B section of Rhythm Changes. Let us know how you use "walking chords" in the comments below!

An oldie, but a goodie! You can check this one out to get a good look at another type of walking you may want to do on the guitar. Enjoy. :-)