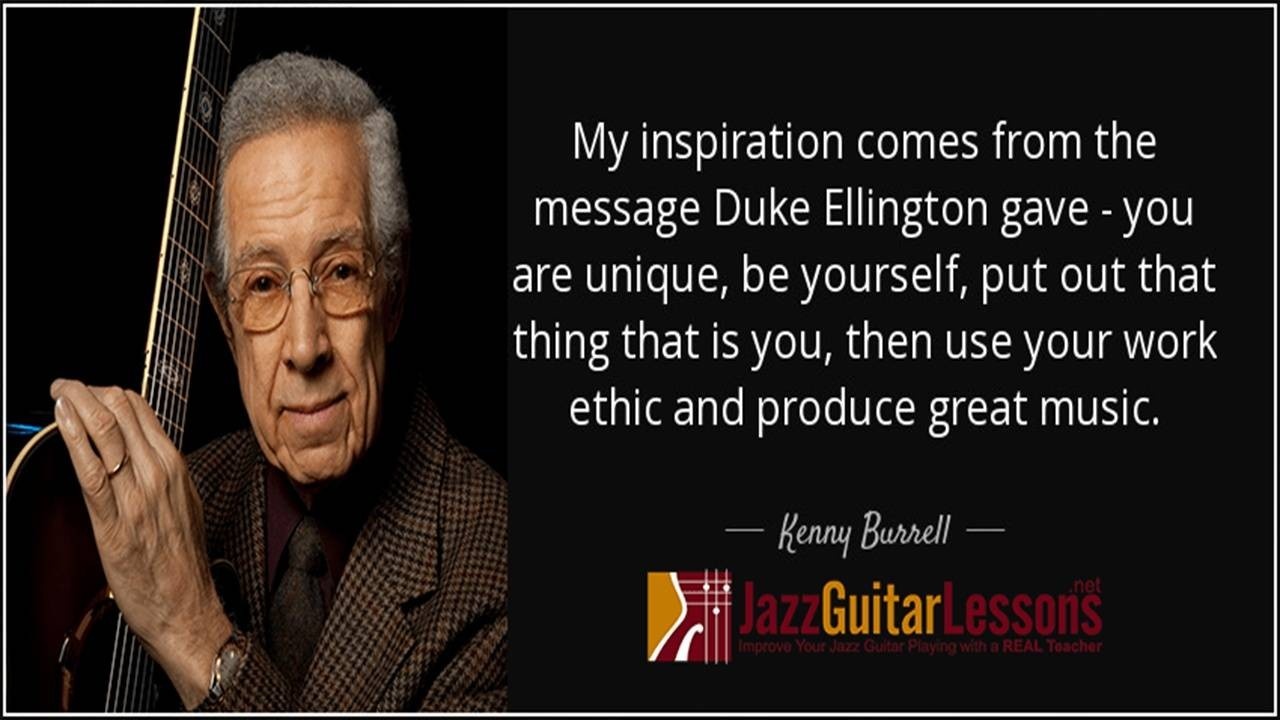 Kenneth Earl "Kenny" Burrell is a true original and legend of jazz guitar. Hailing from Detroit, Michigan, he grew up with a whole cadre of equally legendary figures who would define 1950s jazz including the Jones brothers (Thad, Hank, Elvin), Tommy Flanagan, Yusef Lateef, and Paul Chambers, among others. His style was hewn from electric blues, original (proto) bebop and classical guitar in almost equal measure.

The result was a sound that was at once refined and raw, eloquent and boisterous. He could play beautiful unaccompanied chordal passages, frenetic single note barrages, supple blues vamps and swinging bebop lines - all these ideas being superficially disparate, yet clearly coming from the mind of a player with a clear idea of what he wanted to sound like.

A much in demand studio musician, his recorded output is huge. He played on countless pop albums in a time when jazz musicians often worked in this milieu. (The lines between pop and jazz were blurry and indistinct in the 1950s and early 60s. Post-Beatles is another story…)

“I like a fat warm sound, so I set the treble lower, the bass medium, and I pump up the middle.” -Kenny Burrell

As much an educator as a performer, he is the director of the Jazz Studies program at UCLA. This position evolved out of a course he has taught since 1978 called Ellingtonia. The UCLA jazz program has flourished under his stewardship and boasts an All-Star faculty.

Guitar-wise, Burrell has used Gibsons for the majority of his career. Early on it was the ES-175 (with the Charlie Christian bar pickup) as well as the L-7 and L-5 models. But the guitar he is most associated with is the Gibson Super 400. He also has a signature model built by Heritage that is essentially a Super 400 model. Most of his 1950s recordings were done with his Fender Deluxe amp. (Also known as the Tweed Deluxe or 5E3.) This amp has distinctly musical overdrive and compression characteristics and emphasizes mid range frequencies. 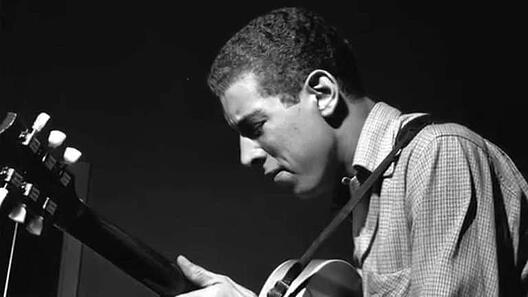 He would later favour the Fender Twin Reverb. The scooped mids of the blackface Fenders contrast with the Tweed amps, and Burrell states his tone preferences in this quote: “I like a fat warm sound, so I set the treble lower, the bass medium, and I pump up the middle.”

Playing wise, Kenny Burrell drew on electric blues influences like T-Bone Walker and BB King as well as the more linear approach of proto-bebopper Charlie Christian. The 1950s saw the advent of what would be known as Hard Bop (arguably a reaction to West Coast Cool Jazz) as well as Soul Jazz.

Burrell was a central figure in this music and his playing reflects that. Detroit spawned a whole generation of musicians who would define the genre(s). Kenny Burrell concurrently absorbed and influenced this language as it was being created. He was there. Fiery pentatonic runs, subtle vibrato, block chord passages, lyrical glissando and pull-offs were all delivered in an assured and fertile rhythmic vocabulary with a gorgeously round tone.

Read or watch Kenny Burrell Untold here, where we ask ourselves “What can we learn from Kenny Burrell?” (other than playing amazing improvised jazz guitar lines!)

Don’t know where to start listening to the great Kenny Burrell? Perhaps this little top-5 list will help you get started!

Here's a rhythm changes by Burrell called Kenny' Sound. This version hails from Midnight Blue, but there is at least one other recorded version on Blue Bash that phrases the melody a little differently. Notice the alternate changes on the bridge and the interesting use of a dominant pedal on the A sections. 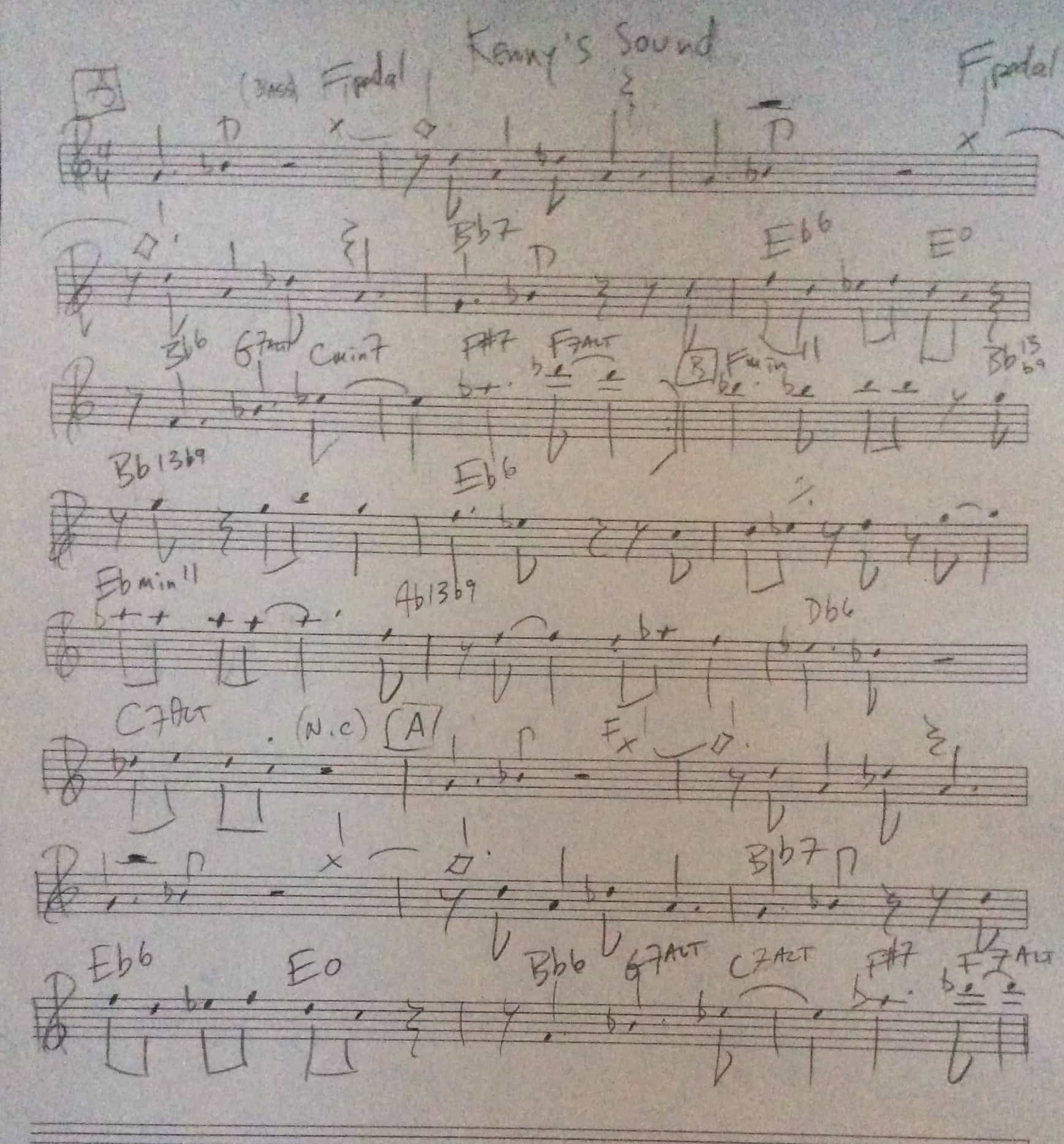 Kenny Burrell Transcription: Gee Baby, Ain't I Good To You

Here's another song by Burrell called Gee Baby, Ain't I Good To You. This song, recorded by Don Redman on 1929 in New York, was written by Redman and Andy Razat. Later on, it was also covered by Nat King Cole, Peggy Lee and others. It's from the album Midnight Blue by Kenny Burrell, recorded April 21, 1967 on Blue Note. Get Midnight Blue. A nice introduction to his legendary playing. :-) 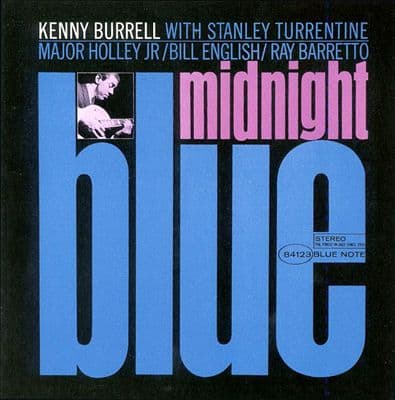