Jim Hall was arguably the most musical jazz guitarist of 20th century. His playing was at once grounded in tradition, and forward thinking. And that, even though jazz was still a young art form when he first picked up a guitar. He developed a style that was devoid of clichés and rich in musicality rather than mere guitar pyrotechnics. A true member of any ensemble, he fit in and flourished in a myriad of styles and among big personalities.

In the present Untold series, we’re looking at legendary jazz players from a musical and personal development perspective: what can *we* learn from these players? So let’s jump in and talk about the four most important lessons in the Jim Hall legacy. 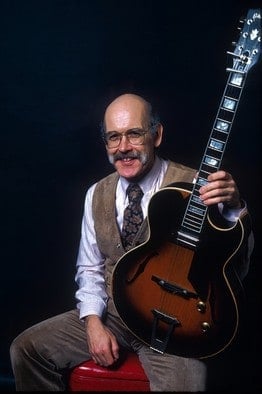 So, How did Jim Hall actually come to be so revered by his fellow jazz musicians and peers?

The biggest contributing factor would be his ability to see the BIG PICTURE, musically speaking. Inspired at an early age by Charlie Christian, he could have easily continued along that path and become a bebop player (like many others). But his curiosity would prove too far reaching to simply copy a proven style and stick with it.

Hall majored in Music Theory at the Cleveland Institute of Music, studied classical guitar in Los Angeles and also played in groups with unorthodox instrumentation. For instance, Chico Hamilton’s Jimmy Giuffre’s trio. Our man used all of this experience to develop a jazz guitar sound that was built around his incredible compositional sense.

So, what’s the big takeaway here? How can we channel some of his wisdom?  I believe that simply “Being Open” is an advice that can benefit ALL musicians. In short, you may love jazz guitar, but studying another style will make your jazz playing stronger.

Play Classical, flamenco, Chicago Blues, Indie Rock, Metal and it will take you out of the jazz bubble for a while. Or you could also read classical scores and see how you can adapt the materials to the guitar. Start a band that has no bass and no drums. Anything goes! No one can tell you *how* to be creative.

So we can follow Jim Hall’s footsteps by being receptive to something outside the jazz education “box”. The real education then becomes the world around us and the people we interact with. Also check out his Jim Hall’s book “Exploring Jazz Guitar” for an intimate look into Jim’s musical mind. 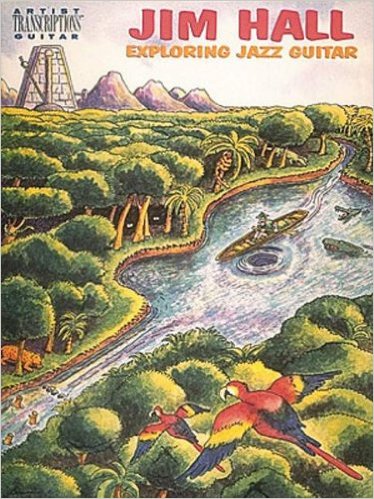 The second lesson we can learn from Jim Hall is all about creating new music. You, as a jazz musician, might not write lots of music music. But you probably should. Not because the compositions will be great, but simply because the *process* is important in  itself. We grow as musicians by struggling with getting your ideas into other people’s head and hands.

In the case of Jim, he played standards, jazz originals by others, and most of his later records featured his own compositions. His albums took on the personality of the original material and shaped the tone for the sessions in a way that made them more than just blowing sessions where people would run off a few standards and call it a record.

So the big lesson here is this: The players get an insight into the band leader’s personality by playing their compositions and this can have a powerful effect on group dynamics even when playing more familiar material later on. Think about *THAT* next time you’re playing a dozen standards in a row and feel the music becoming stale! 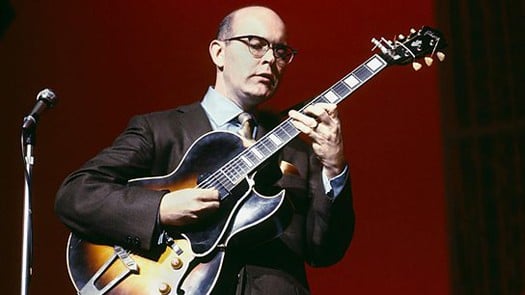 Be A Supportive Accompanist

Jim Hall sounded just as great behind a soloist as when he was in full flight. His comping had a floating quality and he almost always used a sort of post-Freddie Green strumming style. Lots of propulsive rhythms mixed with interjections of counter melodies and beautiful textures.

As he describes in his book, he used the amplifier to “play quieter”. Jim could have a lighter touch and use dynamics in a way that a purely acoustic guitarist could not.

Good but contrasting examples of Jim Hall’s basic style are these two recordings:

secondly, his duo records with Bill Evans where he gets into more interwoven rhythmic sophistication. 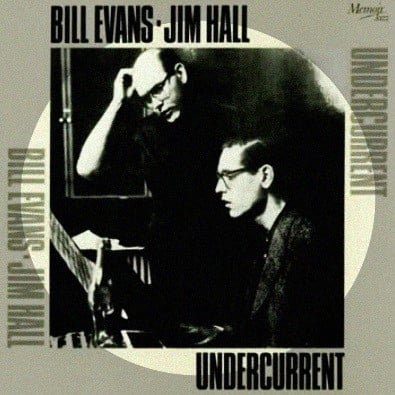 How to channel Jim Hall and apply this to our own comping? Try to make the most of what you know. Easier said than done, I know! In short, you don’t need 1000 chord voicing to play well with others. But good timing, a nice touch and a sense of space go a long way. So aim to develop a *small* vocabulary of chords that you truly enjoy and are solid with. Learn some tunes really well. And play them with others. Listen.

Note that while we’re struggling to remember a voicing, we are probably not listening! So it’s important to know tunes well enough that you can actually listen as if you were in the audience. And then play. We have to leave our ego at the door (It’s hard to do.) Make supporting the musicians around you your priority while comping. The music will sound better for it.

Be A Well Rounded Person

And finally, the last lesson learned from Jim Hall is a bit less tangible. And it’s about “personal development” (notice the quotation marks).

Personally, I’m trying to remember that the person I am comes through in the music I play and vice versa. Jim Hall wasn’t just a jazz icon who everyone loved because he played music beautifully. The general impression was that of a person of great decency and scope. When you meet people who studied with him, they often share this trait. Perhaps he rubbed off on people. Or maybe he just attracted like-minded people.

Artists are often interesting people, but some are jerks. Just like the population at large. Jim Hall was into art and literature, as well as all kinds of music. He seemed to be a very thoughtful man.

So, to wrap up this Jim Hall Untold video, remember that music is a social endeavour. In the internet age, it’s so easy to stay at home and use band-in-a-box all day. But music is ultimately made by real people in real places. And no matter how well you play, people enjoy playing music with people they want to hang out with.

So, in summary, Jim Hall has personally taught me: “Don’t be a jerk!”. When you have a community of people who enjoy each other’s company as much as the music they play, great things happen. And even if the session sucked that day, hopefully  we can all laugh about it at the pub, over drinks.