It's about getting the right DEFINITIONS to start with!

The most common "mistake" that comes across in private lessons, Facebook comments and YouTube comments is confusing inversions and voicings. Those are two separate concepts that I cover at length in the video.

Chord Inversions are chords that don't have their root note as the lowest note. Instead of laying out the C major triad as C-E-G, we can keep the same chord contents (same notes), while changing the order in which they appear.

Most of the confusion, I believe, comes from a lack of proper definitions for some of the basic terms in jazz music theory and harmony. In other words, the nomenclature is often not well established in the intermediate jazzer's mind.

Here are the 9 Steps We Will Go Through:

Grab a strong cup of coffee, it's about to get intense.

So, are you ready to get enlightened?  Dig in! :-P

A triad is built of three notes. The simplest example is a C major triad, it contains the notes C, E and G. The triad can also be understood as the 1st, 3rd and 5th notes of the C major scale. 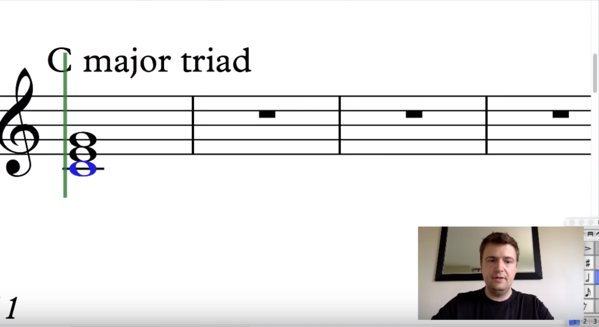 Instead of laying out the C major triad as C-E-G, we can keep the same chord contents (same notes), while changing the order in which they appear. 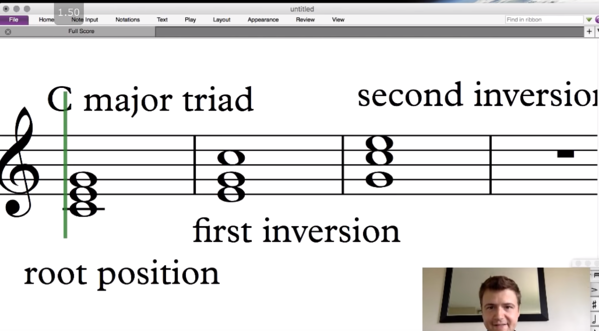 3. Build the 7th chord and its inversions

In the video, around 3:30, I slowly introduce the concept of 7th chord. Simply put, if a triad contains three notes, then a 7th chord contains four. It's pretty straight-forward ...

In the example, C major 7 chord contains the notes C-E-G-B. Those are the first, third, fifth and seventh notes of the C major scale, respectively.

Now, inversions for 7th chords work the same way as triads. Any of the four notes in the chord can be found as its lowest. The only new thing we have to keep in mind is that there is now what we call a 3rd inversion, when the B of Cmaj7 is found as the lowest note. 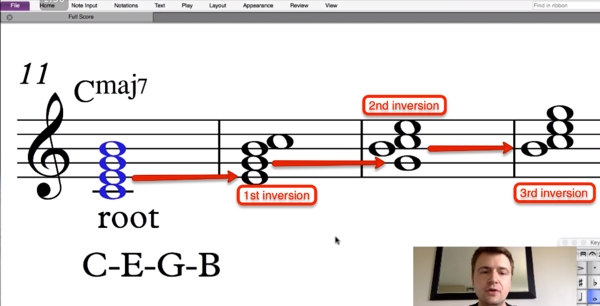 Now, there's a point in the video where I rant a little bit about inversions and confusion. That's around 5 minutes mark. If you watch only one segment in the video, *that* should be the one!

In short, knowing the inversion of a chord gives you access to ONE (and only one) piece of information: which note is lowest. Zat sit!

Knowing that you're playing "F#m7b5 in the first inversion" (to take a hard example) ONLY allows you to conclude "Ok, I know that that 3rd degree of the chord is in the bass". BUT it doesn't allow you to conclude anything else.

Not yet at least! LOL

5. Accept that you're not the bass player

As a side topic in my "rant" from the point above, guitarists must remember something important:

You can play inversions of Cmaj7 on your top strings all day, if the bass player decides to sit on a low C note, the musical result is not really an inversion.

It is an inversion on your guitar fretboard, technically, but not an inversion for the entire band. This ought to save you some headaches in the future!

In short, the inversion really is defined by the lowest note in the orchestra and not just on the guitar or piano.

At around 7 minutes in the video, I explain how to create Drop 2 voicings. In simple terms, Drop 2 means to drop the second highest note in the voicing down an octave.

Of course, we must do this for every inversion in our Cmajor7 chord that we had in our previous steps. This generates four inversions of the Cmaj7 chord in a Drop 2 voicing:

Notice, however, that  the inversion information is not preserved when going from our basic voicings from above and dropping a note down a octave.

This is why we must look around and rely on the definition of inversion itself to qualify the Drop 2's. The first chord has a G at the bottom, and it's thus a 2nd inversion C major in Drop 2. It's a mouthful, I know!

Important note: you'll recognize the third chord here as C-G-B-E, playable as x3545x on the guitar. A common, garden-variety chord for jazz guitarists! :)

... and I could have added to the sub-header: AND don't confuse inversions and voicings definitions!

If we qualify Drop 2's for what we DO to the original voicing, then we must have a name for whatever the voicing was originally, when we just stacked 3rds on top of one another in the first few steps of the video.

As we saw above, we built inversions of closed voicings before introducing Drop 2's. In short we have:

Thus, we use the term closed voicings when the notes within chords are all "crunched" as close together as possible. Here's a closed voicing:

So going back to our definition, the picture above is a C major 7 closed voicing in root position. All notes are as close as possible together, and the lowest note is the 1st note of the scale. And the chord is C major 7. Simple?

In contrast, here's the same chord, in drop 2 voicing, in root position. 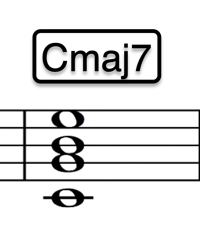 BUT they differ: they are written/played in a different voicing. Starting to see a clearer picture now? The voicing is what tells us about the layout of the notes within the chord.

Now, for a little homework: go back up this page and give a name to each and every chord you see in the screenshot picture. Your "chord name" should contain this information:

And now, we are ready for good working definitions.

Inversion: gives information about the lowest note of the chord only.

Voicing: gives information about the spacing the notes of the chord only.

Ok, those are not really definitions. Nevertheless, they're a pretty decent way to remember what's what when learning music :)

9. Experiment with other kinds of spread voicings

Of course, if you see a Drop 2, why not create a Drop 3? Exactly. This is found in the video around 13 minutes.

Go ahead and experiment with different spreads for voicing. Keep your method consistent: the "drop concept" always refers to dropping a note down an octave. Do it for all inversions.

Most of those won't be playable on the guitar, but it doesn't really matter! If you can dream it, you can write it down on staff. I recommend these to get you started exploring:

WRAP UP: Voicings versus Inversions ... You good?!?

There's plenty of materials to learn in theory, especially for jazz chords!

We've scratched the surface in this blog/video. Remember, we did not even cover chords with doublings (i.e. having the same note appear more than once in the chord).