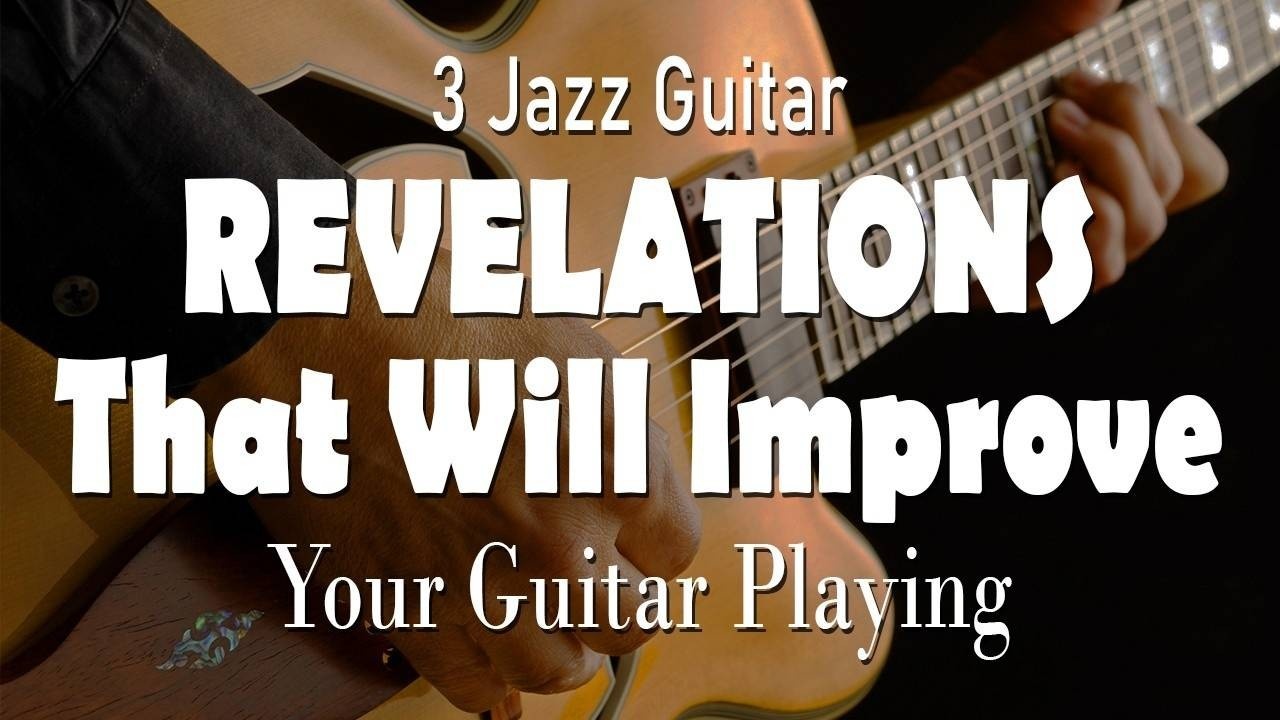 Three Revelations That Will Improve Your Guitar Playing

Here are three revelations that have nothing to do with the technical and theoretical aspects of playing Jazz Guitar that will help you take the next steps in your musical journey and improve your guitar playing. These three points usually strike the beginner-intermediate players and from that moment, they improve at a fast pace.

1- You Need to Play More Songs

Chances are that you got into jazz after hearing one or many songs. I got hooked the moment I heard Grant Green play Miles Davis’ “So What”. Strangely, a lot of players spend more time learning and practicing theory than actually learning songs. Sometimes they believe that they can figure it out with all their knowledge of theory but this is incorrect.

Many jazz standards are filled with “theory” to learn! Bebop songs for instance have a wealth of quotable lines in them. Referencing known melodies is a great way to make your band mates and crowd frown.

Not everybody wants to be a performer, but if you want to keep track of your progress and witness that you did improve your guitar playing, it is actually easier with songs. Visiting a song after some time not playing it is a great point of reference. You will likely have progressed on many dimensions and playing a tune you used to practice a month or two ago might feel different and easier.

Action: Learn songs and learn them well. Learn them for weeks if you have to. At least 50% of your practice time should be invested on songs. You can start with our jazz standards catalog right now! 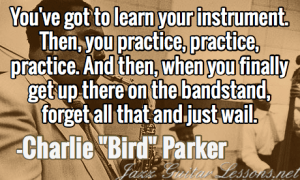 Every jazz guitar hobbyist learn chords, scales and arpeggios. From this information, they understand a ton of things they read on the internet, books and/or figure out themselves (i.e. substitutions, alterations, more scales, etc). The perspicacious will then learn more stuff and try to incorporate them in their playing.

This is when things are getting slower. Cramming too much stuff in your playing (and head) will create a bottleneck in your flow of creativity or put you to halt when you are on the spot.

Action: Simplify things to their most basic form. Those fancier details, if you practiced them thoroughly, you know them and you can “forget” them. Trust your gut.

Effect: It will help you be more spontaneous and thus improve your musicianship. You will start developing your own sound too which is probably your ultimate goal as a musician. Nothing shows that you did improve your guitar playing more than being completely spontaneous.

Be aware that I am not saying that you should learn fewer things, absolutely not. You should absorb material then let it go away. For example: You don’t necessarily decide that you will play a tritone sub every time you see a certain chord quality. It should just happen because you know it can be placed there in your subconscious. 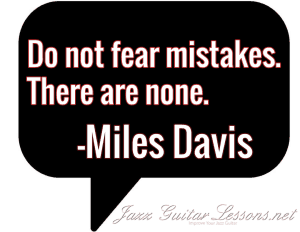 This one requires a few episodes that have occurred through the years.

Jazz guitar players want to sound great and that is totally normal. Nothing feels better than playing a piece and it sounds good to your ears. The problem is that they dread mistakes. Most players want nothing less than perfection every time and everywhere, even when practicing. This is actually not the proper mindset to improve your guitar playing.

You might not want to experiment on stage, but sounding bad in the practice room is okay! This is where you try out things and figure out what works and doesn't. If you know where your weaknesses are, you know what to work on to improve your guitar playing!

Action: I will go as far as saying that you should embrace mistakes. Turn mistakes into new ideas (then I stray away from what I originally wanted to do but that is another story).

Effect: You will take risks (at least in the practice room) and be a better musician because you will know pretty well what you want to do.

Note: A common misconception many players have is that if you are not complying to the theory, you are wrong. My point of view is: if it sounded good, then you weren’t wrong.

Ny Fanilo Andrianjafy is a guitarist living in Canada. His main influences are traditional music from his birth country, Madagascar, and blues. He discovered Jazz at the age of 19 and has been in love with it ever since.