Hello everyone and welcome back to Jazz Guitar Toolbox!

In case you are not familiar with Jazz Guitar Toolbox, this is an entry-level series - the goal here is to cover the essential skills every jazz guitarist should have.

Today we'll be exploring the harmonic minor scale – I’ll show you how it is constructed, some useful ways to play it, and in which musical situations it can be used.

What is the Harmonic Minor Scale?

This scale is very similar to the Melodic Minor Scale (or Jazz Minor). Remember that for the melodic minor scale all we did was take a Major Scale and flatten the 3rd. Now, for the Harmonic Minor Scale, we are going to keep this 3rd flattened, and also flatten the 6th degree (or note) of the scale.

So, if we have the C melodic minor scale, we already turned the E (from the C major scale) into an Eb. Now, all we need to do is turn the A into an Ab, and voila! We have the C Harmonic Minor scale.

Because this scale is very similar to the melodic minor scale, we can just adapt the fingerings we already have for that scale.

All we have to do is play the same patterns and just flatten the 6th. However, because of the augmented second interval between the b6 and the natural 7th, the stretches can feel a bit weird and uncomfortable, so don’t be afraid to move your hand position as needed.

Root on the 6th string: 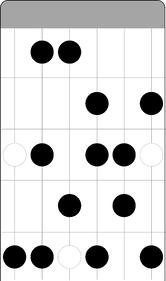 Root on the 5th string: 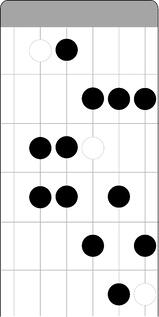 Recap: How To Practice These Scale Shapes

Just like in the 2 previous videos I will quickly outline a step-by-step practice routine that you can do on these moveable shapes. Here's a quick recap, and as always they're in the downloadable PDF:

3.Thirds: Ascend and descend through the scale by playing diatonic thirds.

4.Improvise: Put a metronome on beats 2&4 and improvise
You're going to want to do this in all keys - but wait to do that until after you've memorized the basic shapes.

Then, move on to different keys, one per day. Here is an order of keys that you can follow:

When To Use This Scale

I don’t know if you noticed, but this scale has a much less subtle sound compared to the major scale or the melodic minor scale. It is one of those scales that you can tell right away there is something strange or “exotic” in it. Because of this, it is often used to spice things up a bit, or as an interesting effect. Similar to what we did with the melodic minor scale, I would start by using it over a tonic minor chord. So, for example, on the “i” chord of a minor ii – V – i.

Now, there are a couple of more interesting uses of this scale that are often referred to as the Harmonic Minor of Destination (or HMD). We’ll explore further why it is called that way, but it is basically because we are using a single harmonic minor scale as the main reference point:

This is the 5th mode of the Harmonic Minor scale, and it is often called Phrygian Dominant. Pretty self-explanatory right? It has the b9 (which is the signature note of the Phrygian mode) and it is the 5th mode, so it is played over the V dominant chord.

Using this scale is actually pretty simple if we think about where the V dominant chord usually resolves to. Because it is the 5th mode, we can think of it just like we would apply a plain Mixolydian mode, but now in a minor tonality. In other words, we can play the Harmonic Minor scale that pertains to the “I” chord this V7 will resolve to. So, for example on a minor ii – V- i in C minor, we would play the C harmonic minor scale over the G7 chord. And of course, we could also play the C harmonic minor over the i chord (Cm)

Now, a couple of things worth mentioning about this approach. If you notice, we are always targeting the harmonic minor scale pertaining to the “i” chord, so this is why this approach is often called the Harmonic Minor of Destination (or HMD).

Also, this approach will NOT always work on a minor ii-V-i. This will depend on the extensions the chords might have. For example, if the band plays a im6 chord, we can’t use the harmonic minor for the i chord, or if they play a V7#9, the HMD might not be the best option. So, use your ear!

That's it for today's lesson! Comment below if you liked the lesson and any questions you might have :)