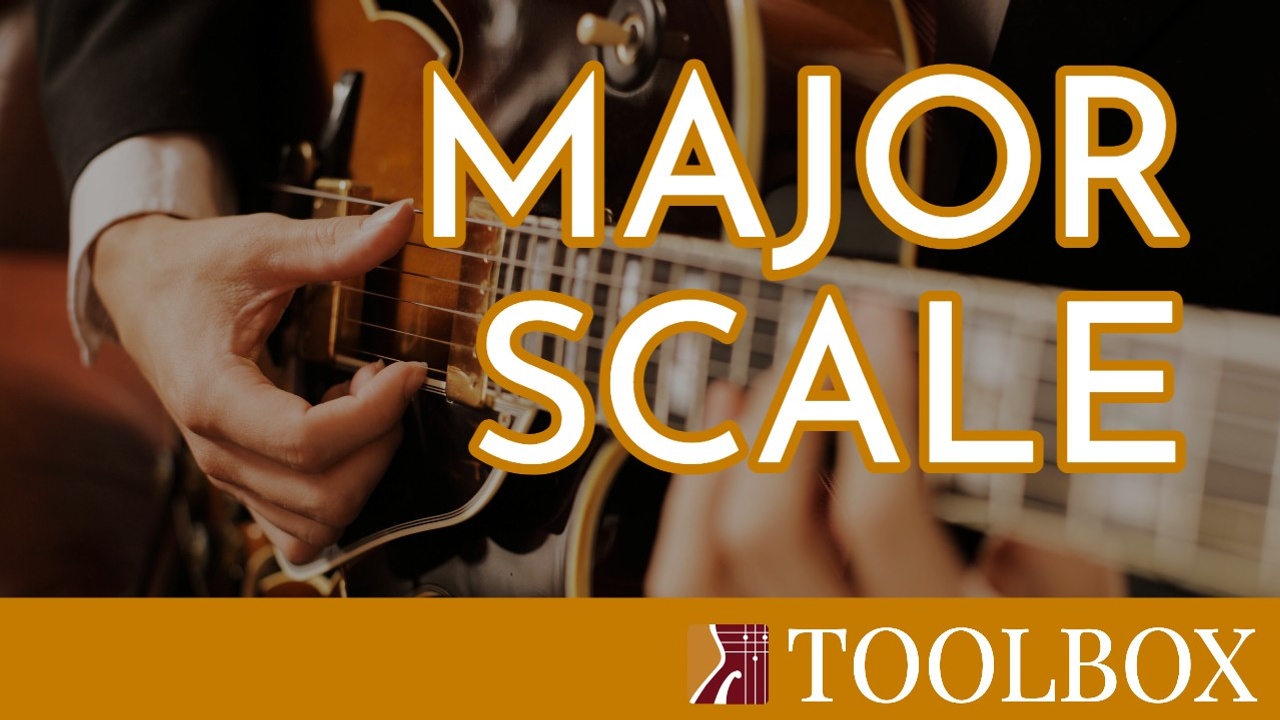 What are the essential skills (or tools) every jazz guitarist should have? We'll attempt to answer this question over the course of this series, Jazz Guitar Toolbox.

The goal of this series is to lower the barrier of entry into the world of jazz guitar by giving you all the tools you'll need to play standards and beyond.

Some of this stuff might seem basic but remember - you can't build on a rocky foundation!

This first lesson is all about the major scale. I'll show you how to play it, how to practice it in an effective way for jazz guitar, and then explain the theory behind it.

First up, you're going to need a couple of moveable fingerings. In this lesson I'm going to cover two: The roots of the scale are indicated in white. So that means if you need to play a C major scale, just use this shape starting from a C note.

This will also help you learn the names of the notes on the higher strings if you're unfamiliar.

You might be wondering, why is there an extra note at the end? Shouldn't the scale end on the root?

The reason for this is that you'll be improvising with this pattern, and it's just another note that's fair game. So we might as well practice it! You'll have to shift positions in when practicing this one - be sure to start with your index finger when you get to the 2nd string.

There are many more scale patterns that exist, but if you're just starting out, then this will go quite a long way.

2. How To Practice These Scale Patterns

Now that you've learned the shapes let's talk about how to practice these effectively.

I'll make it simple: here is an actual step-by-step routine that you can do each day until you're feeling really confident.

1. Long tones: Ascend and descend at 40bpm (or slower), one note per click. Focus on your sound, and your left hand technique. Bonus: say the note names out loud!

3. Thirds: Ascend and descend through the scale by playing diatonic thirds:

4. Improvise: Put a metronome on beats 2&4 and improvise lines. Try to sing in your head or even out loud, and reproduce it on your guitar.

At first, just do this in C major. Learn C like the back of your hand!

Then, move on to different keys, one per day. Here is an order of keys that you can follow:

I recommend using this order rather than, practicing the different keys chromatically (going up one fret at a time). It mixes things up more, and allows you to learn each key independent of one another.

3. Theory Behind The Scale

I've always thought that it's much easier to understand something in music after you've done it in real life - that's why I've saved this section for last.

The simplest way to think of a major scale is as a formula of whole steps and half steps. Whole step = 2 frets, half step = 1 fret.

Now that you understand the formula, try to slowly work towards memorizing the notes in each major scale.

This may seem like a impossibly long task, but it can be done by:

Or if you prefer to focus on one thing at a time.... spend a long time with each major scale. There are 12 months in a year, there are 12 different keys. Hint hint! 🤔

Here is an answer "key" you might find useful: