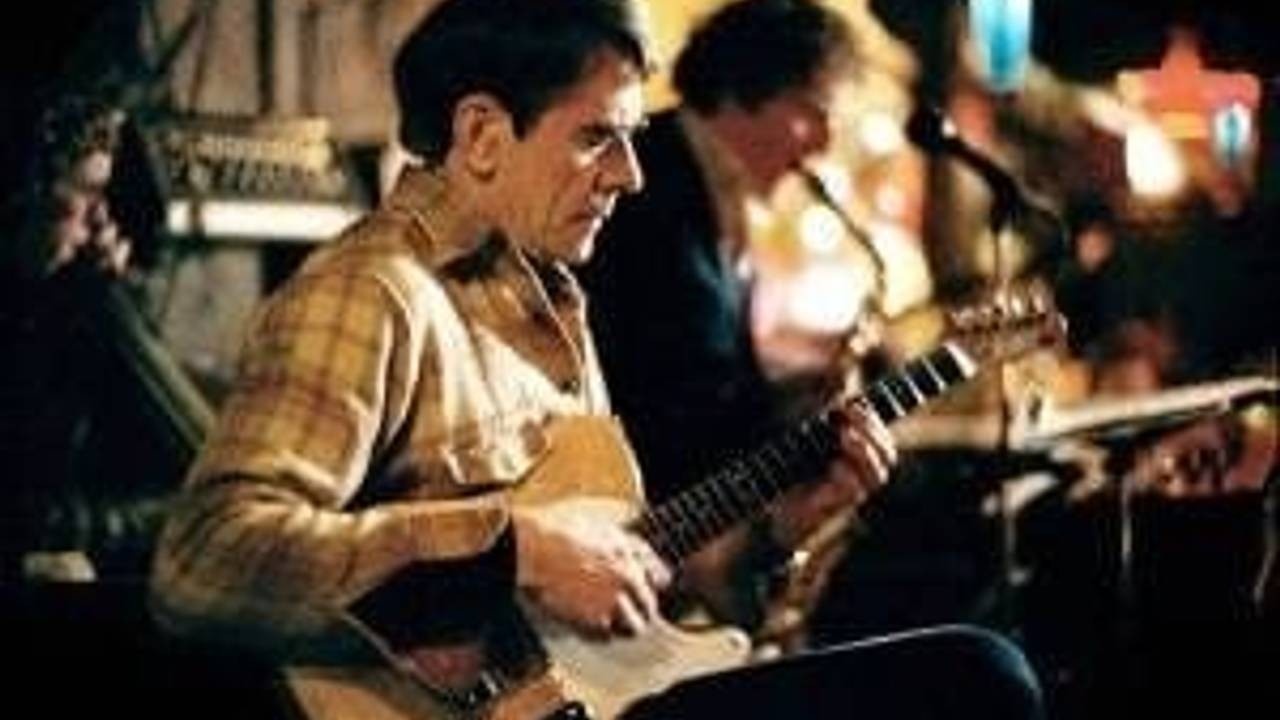 Part 1 - Japan, Donuts and Plucking Like a Jazz Guitar Great

Canadian jazz guitarist Ed Bickert is a living legend. A series of fourteen short clips (from closed-doors interviews with Jeff Bickert) were published on Vimeo in 2014. Yours truly, the author of the post and the webmaster on JazzGuitarLessons.net, recently stumbled upon them and decided to make them available (embedded) on this blog.

I hope you'll enjoy these Ed Bickert footages as much as I did. The interviews gives us a completely new (and quasi-private) insight into the legend's musical mind. Since this is a blog post, keep in mind that I will discuss some of the topics Mr. Bickert brought up during the interviews along the way. Enjoy!

Jokes aside (a bag of donuts!), it is interesting to see what Ed Bickert says about attitude. He mentions at the beginning that he put himself "in a good mood" before the tour, and wound up being satisfied and enjoying many aspects of touring. This is something which might not have happened if he had maintained, like most of us, an attitude of anxiety and worry towards what is coming up next.

"Super deluxe accommodations" helped, that for sure. But it all starts with a positive outlook. :-)

Avant-Garde Jazz: Plucking instead of Strumming

What is interesting here is to note that Ed Bickert started out with a flat pick, like the rest of us. His hybrid plucking (pick, plus the "fingers claw") technique really gave Ed his distinctive, now legendary sound.

So, how did it all begin?

As Mr. Bickert discusses in the interview, some composers in an avant-garde group of the era instructed him to not strum chords. So he started to pluck. The composers specifically said "but don't play the chords with a pick, we don't want the strumming" since all notes had to sound at the same time, together. So plucking was the only way out, and Ed Bickert had to get used to that then.

Mr. Bickert also discussed Billy Bauer, a great jazz guitarist who played lots of "all fingers" stuff at the time. Although Ed was aware of Billy Bauer's style in those days, it was really through this avant-garde band (and the composers' requests) that Ed developed the sound. A musical project "forcing" a way of playing unto you. How great is that? Then eventually, Ed Bickert went for a hybrid style of pick and fingers for the rest of his career. That's the "Ed Bickert comping sound" we hear and love on all latter recordings.

Also worth mentioning about this way of plucking and picking with both pick and fingers: in the first few years of playing, Ed was trying to finger all the six strings at once for every chord in a song. Sometimes, notes within the chords wound up getting doubled, giving a different flavor. Then, there came times where all strings simply couldn't be fingered all at once (obviously!). So Ed Bickert started to look at chords differently and play harmony with a different "grip". The hybrid picking allows for strings to be selectively sounded (or not). So Ed says "When the "barring the six strings" did not work, it was really useful to have the plucking technique".

Part 2 - Getting a Thrill From Harmony and Arrangers

Here are some more insights into Ed Bickert's legendary playing. Some musical thoughts that are extremely relevant in understanding his genius and approach to jazz guitar chords. Ed talks about what he finds exciting in nice, surprising harmonies (on the guitar or otherwise) when they're done with "the right approach, the right sound". And in the second video, the master mentions arrangers (such as Gil Evans) and some of his personal unsung heroes. Let's watch, shall we? :-)

Harmony: in Music ... and on the Guitar

It is fascinating to hear Ed Bickert discuss harmony openly like that. I don't know about you, but a huge crowd of fans consider Ed the reason why harmony is now "possible" on the guitar, in this day and age. With his subtle tone from a Telecaster, he single-handedly redefined jazz guitar comping like no other jazz guy in history. His approach to jazz harmony is extremely subtle and refined.

Ed is saying that he purposely tried to keep searching and finding new ways to play chords "beyond the basics". He was trying to "get away from the basic stuff, to make harmony more interesting". Furthermore, he discusses how early into the learning guitarists usually get tired of all the guitar method stuff. The "basic chord formations" as Ed Bickert says. As the interviewer adds, we are looking for richer and more complex chords. No surprise here!

"A lot of the ideas I got for chords come from listening to bands. Well, Duke Ellington has always been one of my very favorite, but there's a whole bunch of others over the years. Like Gil Evans, and people like that. They were making harmony much richer. And sometimes, we hear whole areas sounding dissonant for a nice change of color."

And for dessert, the master mentioned how getting our ears accustomed to rather simply harmonized classical music (i.e. Mozart) was great listening to. So, for Ed, it's all back to basics, after hearing some of the "best" and most advanced harmony of the second part of the 20th century. Including creating some of it!

On Arrangers and a Secret Unsung Hero

In this clip, we hear Ed Bickert talking about arrangers, and those people who, in fact, really got that "right sound for harmony" as mentioned in the previous video. Not much guitar talk, but fascinating to get the man's perspective!

"Gil Evans is definitely one of the most important, well ... composers, orchestrators, arrangers (or something) of quite a few decades. I really love the things that he has done." And, not only was Gil Evans great, he was also Canadian. If you're still unfamiliar with his work, I recommend checking out the Miles Davis album "Porgy and Bess". :-)

Ed Bickert adds: "Gil's writing, he definitely did a wonderful job of, you know, the arrangements he did for some of these outstanding soloists [Miles Davis, Kenny Burrell]. He's very original. He was this good, that's all!" Almost as if Gil Evans' greatness is just assumed, and that it will stand the test of time in Ed Bickert's ears.

Then, he proceeds to discuss an unsung hero of his. Freddy Grofé wrote "The Grand Canyon Suite" probably in the late 1930's. Ed's perspective on this in that a great "behind the scenes" guy like Grofé was an invaluable asset to make good music sound great. "All these wonderful things the Gershwin brothers did, I wonder how they would have sounded without someone like Freddy Grofé. I mean, he was so good at filling all the right notes."

Thanks for reading. See you the next blog post. :-)