What is the so-called Bebop Scale?

First, what is the so-called bebop scale? There's an older video on YouTube titled, "The Bebop Scale Demystified," in which I explain the concept. In a few words, the main idea behind the bebop scales is adding one note to a 7-note scale to make it fit the bar of 4/4. Obviously, a scale that has 8 notes is better suited for 4/4 time signature than a scale that has only 7 notes. For instance, the C major scale: 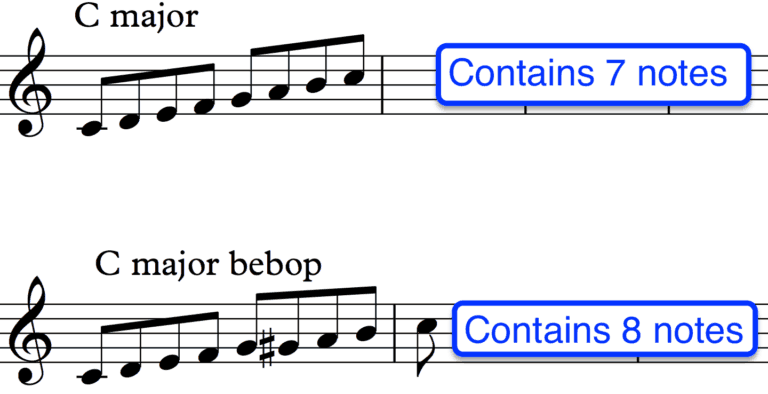 Technically, you could be adding a passing tone randomly (anywhere) within a scale you already know. But in reality, we add a bebop passing tone in a scale by making the important notes, the chord tones, following strong beats.

Well, at some point in their development, jazz improvisers usually get tired of fitting the right scales over chords, like Dorian, Mixolydian, and major scales, and you long for a more chromatic approach to soloing.

After we can easily fit "the right scale over the right chord", we often need some sort of new puzzle or new concept to keep things interesting. But how do we add more notes other than the plain inside diatonic ones? Where should we start? Fortunately with bebop scales, the right notes become the starting point of our chromatic adventure. We'll be adding outside notes to familiar scales, so you most likely grasp 95% of this concept already.

Here's is the PDF file  with the exercises from this lesson. 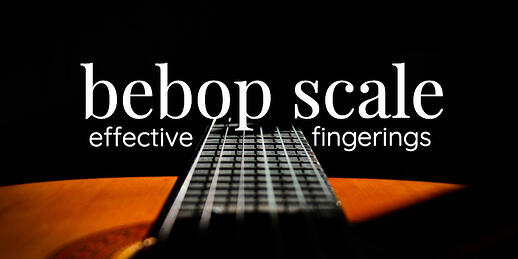 All the theory in the world won't make you play better, so let's just look at these four important guitar fingerings for the bebop scales. Refer to the PDF please  for all the notation (with TABS).

Note that we just had a 1-octave version of this scale. We could have a 2-octave version like this, or we can even start with a C root on the 6th string here, instead of the 5th. Those possibilities are all noted in the PDF.

Closely related to the major bebop, we have the minor bebop scale. All we have to do is lower the 3rd note of the scale, so instead of C, D, and E, it's going to become C, D, and Eb. And that's it!

Before going any further, we need a little bit of musical theory. The last 2 bebop scales in this lesson the D Dorian bebop and the G Mixolydian bebop scales.

Why those choices? And not, for instance, C Dorian and C Mixolydian? We'll because we want to be ready to play on the II-V-I in C major.

Also recall that the scale of choice for this Dm7 is the D Dorian scale containing the notes D, E, F, G, A, B, and C, and that the scale of choice for G7 is the G Mixolydian, containing the notes G, A, B, C, D, E and F. Note that both the D dorian and G mixolydian are still only using notes from the C major scale. Just the white keys on the piano, basically. We call them modes from C major scale. If none of this is familiar to you, please refer to the theory section here.

And now let's add a bebop passing tone to both the Dorian and Mixolydian scales.

This one really is the easiest when we start with the pinkie of the fretting hand to start the scale. Also see the PDF for extra materials, fingerings and ideas.

And lastly, let's explore the Mixolydian bebop scale. This scale applies to dominant chords, obviously, and it's usually called just the bebop scales, or an old-school jazz player will tell you "bebop scale" when referring to the Mixolydian model of bebop passing tone. Here's the G7 bebop scale:

Fingerings for the Mixolydian bebop scale can become really tricky when playing it on more than 1 octave, on 2 octaves. My personal rule of thumb is start with the pinkie or start with the 3rd finger, depending, and shift using the 2nd finger on scale degrees 3 and 4. Of course, you can always see the PDF for full fingerings and tabs of this. Here's what I mean with two octaves:

More "modes" of the bebop scale?

Now we saw 4 bebop scales. Can we use this bebop scales concept on other scales and modes? Yes, absolutely. But you'll have to explore these avenues on your own. Check out the video titled, "Bebop Modes" on the YouTube channel.

A Note on the Fingerings

Did you notice that all we have covered does not fit the regular scale position on the guitar? This is not an accident. 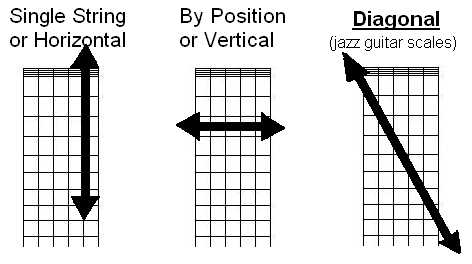 Notice that the aim of using such diagonal patterns is to get identical fingerings on subsequent octaves. The fingers to ears relationship is strengthened. You can play the same musical phrase an octave higher by having the same fretting hand's finger produce the same sound. How great is that if you can find a way to fit it on the guitar?

In conclusion, let me answer some of your questions and that before they even arise. The typical question is always:

Where do I apply bebop scales?

My answer is almost always:

I mean, sure obviously you can use a C major bebop on a C major chord, and a D Dorian bebop on a D minor 7 and so on, but the aim of this whole endeavour is to have you play more chromatically, to have more chromaticism into your playing. Remember, this is not to learn to connect the dots once again and plug in the right scales onto the right chords. We outgrew the "fit the scale over the chord" concept, and we're looking for better, fluid, lines.

I strongly believe that you should build a deep technical proficiency with those exercises before attempting to consciously apply them on chord progression while improvising. You need to develop at least some degree of muscle memory before jumping on applications.

Plus, it's a fact that forcing cerebral ideas into your music is simply bad news. I mean, when you're soloing, the left part of the brain should stay put and not attempt to plug in some intellectual concepts into your lines.

In summary: just learn the materials and have faith that these ideas will show up into your playing when your fingers and ears are ready for it. You just have to believe that it's going to happen, and you have to believe me to some extent. ;-)

Practicing bebop scales is like lifting weights and running a treadmill when you want to get better at sports.

BUT ... the training is not the sport itself.

So rehearsing your bebop scale exercises will prepare you to play nice jazz lines when you are under fire, while you are improvising for real. That is, when there's no more time to think anymore. My advice is go ahead and lift the weights, run that treadmill. Then simply let your unconscious mind do the job. It's much easier this way, and it's really much more fun.

A Blast from the Past

Side note: this video was published as part of a five-lesson series published on TrueFire in November 2014 in the context of #TNTGI2014. These lessons have been re-published on this blog for your viewing pleasure. 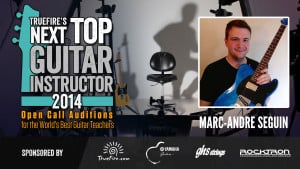