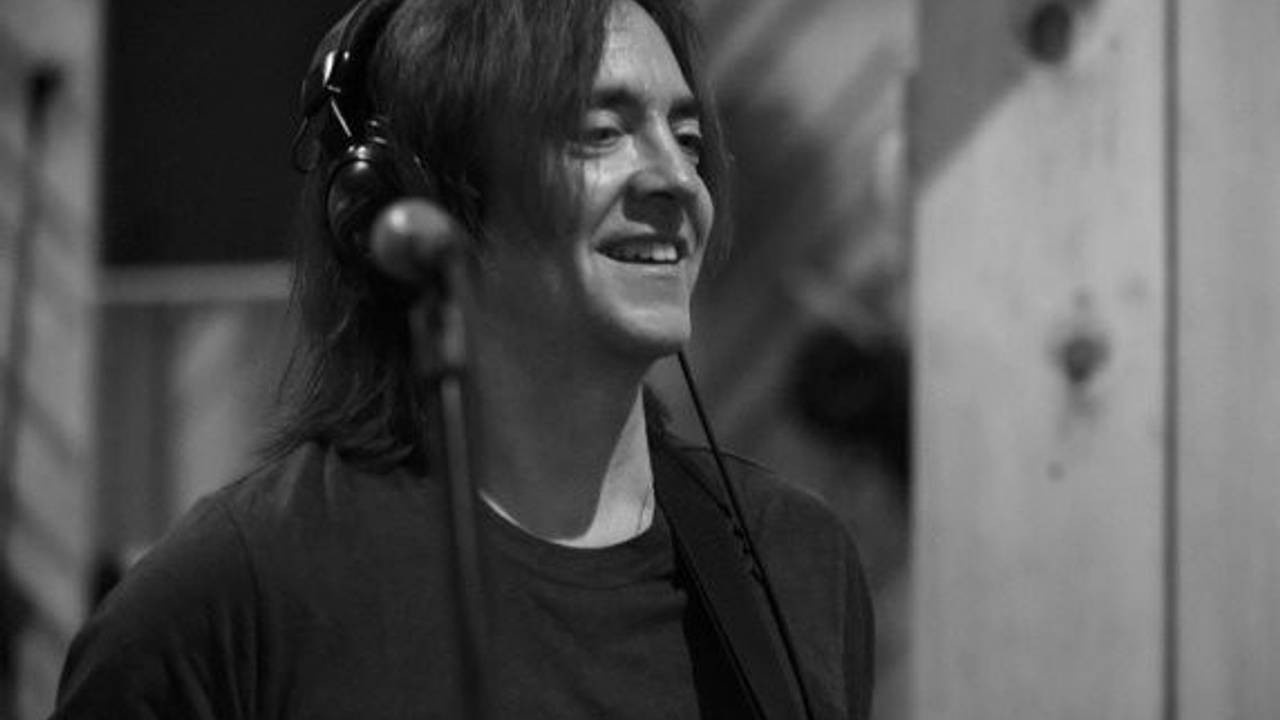 Hailing from Corvallis, Oregon, Wayne Krantz arrived in NYC in the mid 1980s sounding (by his own admission) a lot like Pat Metheny. It was this self-awareness that propelled him to change things up and really start investigating a personal style.

"For a while I sounded like a cross between Pat Metheny and Jim Hall. I had a Mike Stern period, too. But when I moved to New York in '85 I purged myself of everything and everyone and started over." 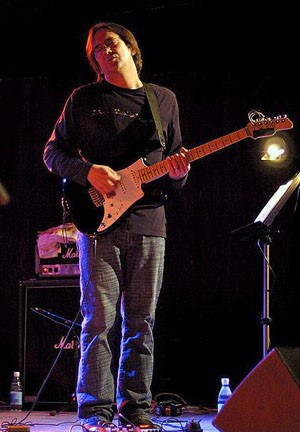 His highly idiosyncratic sound has emerged from a very regimented practice routine that places emphasis on practicing within very strict self-imposed limits, and making as much music out of the materials that are available in that context. One such example is his four fret routine, wherein he improvises within a set tonality (anywhere from 1 to 12 notes) and limits himself to a 4 fret area of the guitar. As an example: 1-b2-5-6-7 with C as 1. (C, Db, G, A, ) This five note tonality (or formula as Wayne Krantz terms them...) would be the basis for the improvising exercise.

These geographic limits force the hands and brain out of scale patterns and into more intervallic and "registral" exploration, as well as opening up (almost by necessity) the use of rhythm to create material.

His career has led to stints in the band Steely Dan, as well as associations with Leni Stern, the Brecker Brothers and David Binney, to name a few. Mostly though, Wayne Krantz has forged ahead on a path defined by a need to create a language and art all his own through playing in a guitar/bass/drum format.

His trio (which at various times has included Zach Danziger, Cliff Almond, Keith Carlock, Tim Lefevbre, Anthony Jackson, Will Lee...) held a weekly gig at the fabled 55 Bar in Greenwich Village for roughly 10 years where the group worked out a sound based on rhythmic precision, groove, improvisation, and constant reinvention. 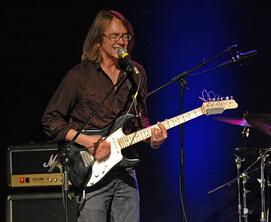 For many years, Wayne Krantz favoured a '73 Strat through a blackface Fender Deluxe amp. (non-reverb) with a Boss Blues Driver, Boss Delay, Cry Baby wah, Boss OC-2, etc. More recently he has used a Tyler super strat style guitar through a Marshall Silver Jubilee head and a Tweed Deluxe amp, as well as a Moogerfooger Ring Mod. His sound is bright and clear, with a characteristic out of phase quack associated with single coil pickups in the 2 and 4 positions. The Tyler is fitted with a bridge humbucker for more overdriven sounds.

Much of Wayne Krantz' modus operandi is laid out in his excellent book "The Improvisor's OS". Pick it up. He also offers mp3 lessons and recordings at his website.

Here is a transcription of Wayne Krantz's solo on Donald Fagen's "The Great Pagoda Of Funn" from the album Morph The Cat. It's a harmony rich ballad that gives an interesting look into how WK navigates more conventional changes than we are used to hearing in his own work. Which is also harmonically deep, but much less related to standard jazz harmony. It's its own thing.

This transcription and audio sample are presented here as study materials of Wayne's playing style only. Do not copy, distribute or playback this track in public. 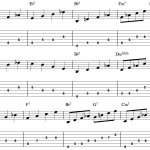 The best way to tackle this solo is to listen to it a lot, and get Wayne's rhythmic sense into your ears. A lot of what he's doing is very subtle and doesn't notate well without a lot of notational busy-ness, so use it as a guide and listen for how he bends and slurs different notes and uses grace notes and appogiaturas. It's very deep. So trust your ears, even though I think the transcrition is pretty accurate.

Video of Wayne on Solo - The Jazz Club Highlights 1990