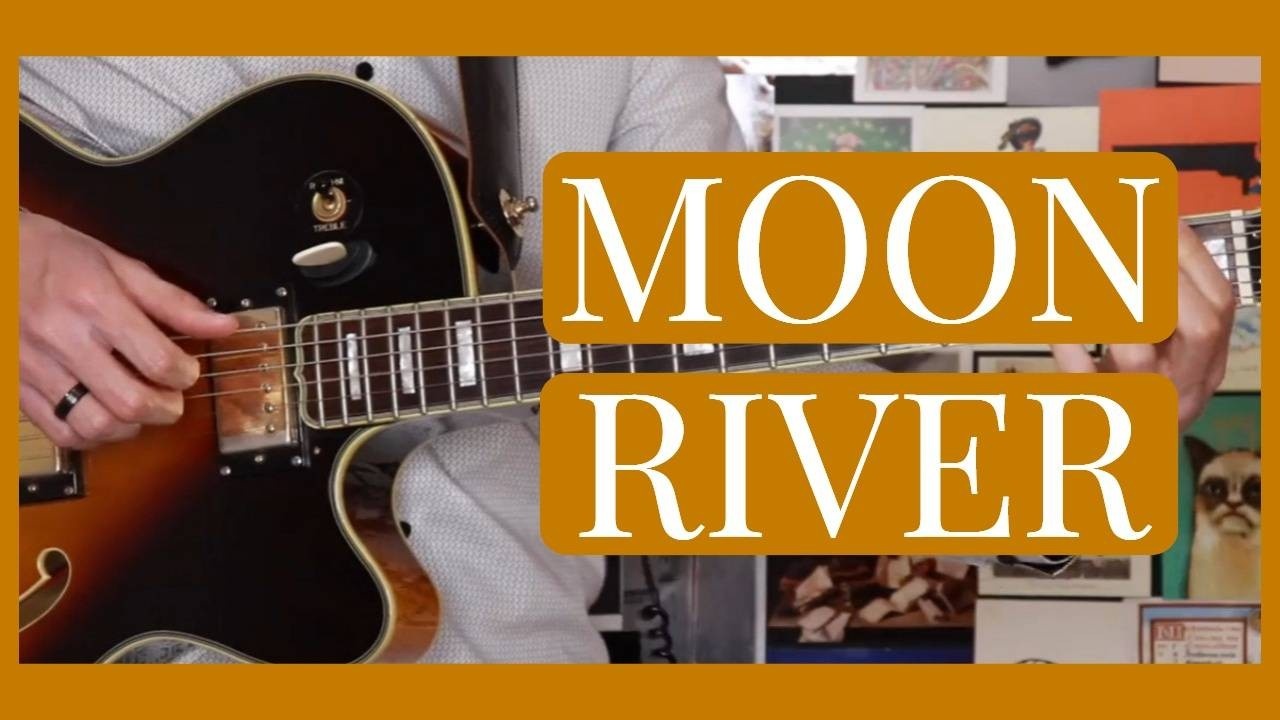 Moon River is one of the most well-known ballads in the Great American Songbook.
Although not commonly called at jam sessions, it works quite well in a jazz guitar setting. In this lesson we'll cover the melody, chord shapes, single-note soloing ideas, and chord melody for Moon River.

Before diving right into the tune I recommend doing some immersive listening - find versions that you enjoy, and be sure to include some recordings with a vocalist (this will help to internalize the lyrics).

Moon River was composed by Henry Mancini with lyrics by Johnny Mercer. It was written for the 1961 movie Breakfast At Tiffany's, starring Audrey Hepburn. Although the film producers were initially worried about Hepburn's lack of vocal training, Mancini was able to write a melody that fit her limited range.

This resulted in a very accessible tune for amateurs and professionals alike, and as such, Moon River has become a popular cover song. It won the Academy Award for Best Original Song, as well as Record of the Year and Song of the Year at the Grammys.

The original recording of this song is in 3/4 time, in the key of F major. However, since this is not commonly called at jazz jam sessions, there is no one "accepted key".

You may be asked to play Moon River in various keys to fit the range or the vocalist or lead instrumentalist. It is also possible to play this tune in 4/4, as heard on Grant Green's version. For this lesson however, the examples will be in the original key and time signature.

This melody fits very nicely in the fifth position on the guitar (which means 1st finger is positioned on the fifth fret). When you're first starting out, sing the lyrics as you go - trust me!

Moon river, wider than a mile
I'm crossing you in style some day
Oh, dream maker, you heart breaker
Wherever you're goin', I'm goin' your way

Two drifters, off to see the world
There's such a lot of world to see
We're after the same rainbow's end, waitin' 'round the bend
My huckleberry friend, moon river, and me

This will help to internalize the form of the song, meaning you'll be less likely to get lost when soloing. Once you can play and sing a very "straight" version of the melody, try embellishing and phrasing it in a more personal way.

Here are some chord shapes that will work over this song. Moon River uses both seventh chords and triads, so don't be afraid of voicings that seem "simple" for a jazz guitarist.

Rhythmically, a good place to start would be a simple 3-to-the-bar strumming pattern. Once you have that foundation in place, start experimenting with dotted quarter notes, or synocopation (ex: emphasizing the "and" of beat one or beat three).

This tune isn't necessarily hard to solo over - it's all in the key of F major, so anything in that scale will work, more or less.

However, to really craft an effective solo over the form, you're going to want to heavily reference the melody. Try this exercise:

Think of the long, held notes of the melody as your target notes. Then, try to play phrases that start or end on these notes. If nothing comes to mind, simply play the melody.

After working on this exercise for a while, put on a backing track and just solo freely. What I've found with myself and a lot of my students is that you begin to play much more lyrically without even thinking about it.

We've kept it fairly simple for this arrangement, as the composers have done most of the work for us already.

However, there are some ideas you may want to explore in your own chord melody arrangements. Let's break it down into 8-bar sections (you'll need the PDF for this):

Bars 1-8: It starts out pretty simple - all we're really doing is putting a voicing beneath the melody. Rather than play F/A like in the original song, I've opted to go with Fadd9/A, for a more lush sound - I felt that it suited the vibe of the song.

Bars 9-16: the melody here gets pretty low in the range of the guitar, but that's okay. When that happens, simply play the bass note - not every bar of the song has to have a giant voicing. It's good to have a contrast!

In bar 12, there is a brief tritone substitution. We move to a first inversion A7 instead of the Eb7, which gives us some nice voice leading into Dm.

Bars 17-24: This is the same as bars 1-8, so you might want to consider altering the rhythms to give it more variation.

Bars 25-38: Bars 25-29 are really the emotional high point of the song, so you'll want to bring those out dynamically. In the final two bars, feel free to do a rit, especially if you're playing this solo.

There's no better place to start than with the original! This version really reveals the composer/lyricist's original intention. If you have time, you could even watch the film to get a sense of how it fits into the story.

Grant Green is one of my favourite guitarists, and here he's joined by the incredible pianist Sonny Clark. What more could you want?

On this record, they transform Moon River into a 4/4 swing sort of affair. It can be tough to change time signatures and still make the melody feel natural, but Green does a a great job here.

Petra Haden sings the lead in this beautiful version by Bill Frisell. You'll hear him use natural harmonics and open strings to comp for himself, which isn't something many jazz guitarists can do at this level!

This ends our tutorial on Moon River. It's a great tune, and a shame that it's become relatively obscure at jam sessions. Consider adding it to your setlist at your next gig - your audience will love it!

Click to go back to our library of free jazz standards