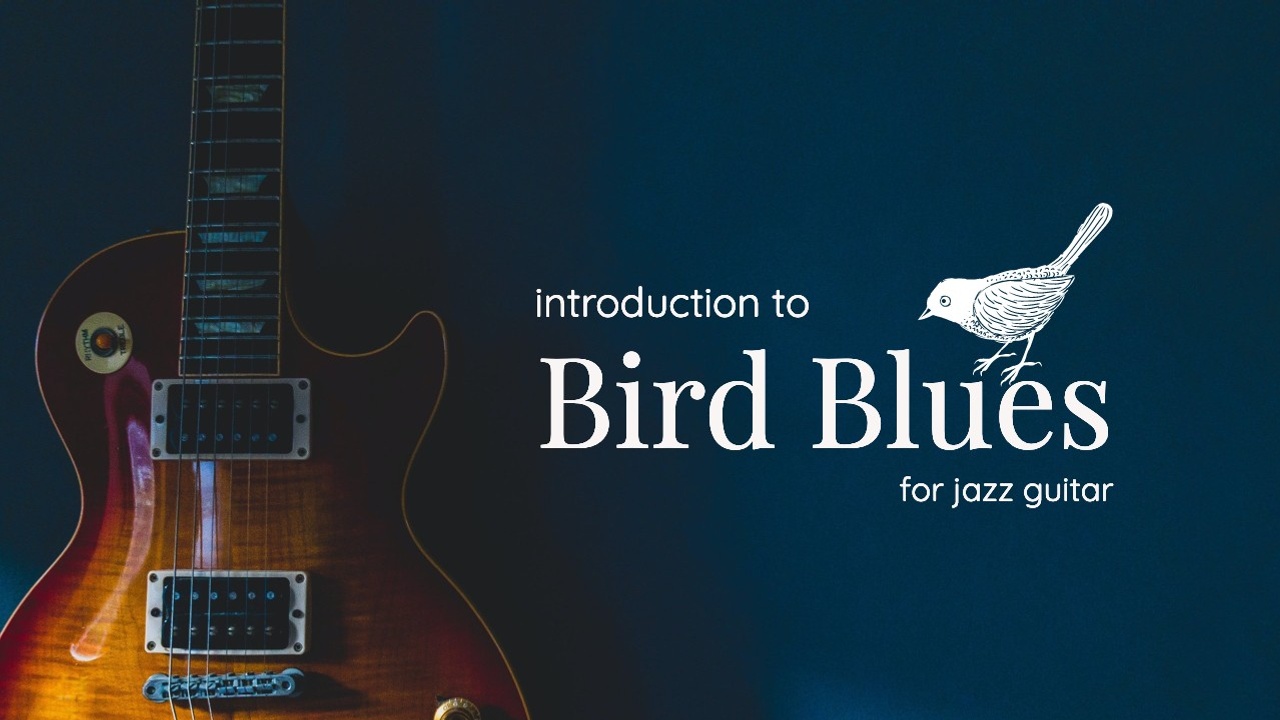 The Bird Blues is a variation on the 12-bar blues form that originated in the bebop era. It was named after Charlie "Bird" Parker, who used it in tunes including Blues for Alice and Chi Chi.

In this short post, we'll discuss several ways to approach the Bird Blues form in improvisation. Don't forget to watch the accompanying video to hear all the examples, and for your chance to play along with your own soloing ideas.

What is Bird Blues? (as compared to other blues)

Well, in fact the Bird Blues (or Charlie Parker blues) features what is often referred to as Bird Changes, a variation on the typical jazz blues chord progression. The main differences are as follows:

How About Some Examples?

Ok, yeah. In the key of C (often referred to as the "people's key") here's the original jazz blues:

Transforming this into a Bird Blues now, you get these changes (analysis, courtesy of the editor): And now guess what? We're done introducing the concept, so we'll get to examples from real-life applications. So, no more C major ... let's migrate to Ab major!

For this video lesson on Bird Blues, here's the Introduction to Bird Blues PDF . All the examples are in the key of Ab major, as we will be using the song Freight Trane to demonstrate all the musical examples. See the video. The melody itself contains more space than other typical bird blues ... plus, as a bonus, we hear a lot of easy pentatonic licks as part of the head.

Jump in right away and comp this bird blues with familiar chord shape. To get started, you can use the charleston rhythms throughout (so dotted-quarter to eighth-note). Use the video to play along with the instructor. The trick to get fluid comping for faster songs (such as bebop tunes) is to let go of the root and play drop 2 inversions on the top-4 strings. You have to take a look at the PDF (above) to get all the juices. In the video, in the second pass, the instructor varies the rhythms (instead of playing plain half-notes as written here).

There's *way* more to be done on this kind of progression for voice leading, but I'll let you get the hang of it yourself.

There's so much magic in properly using the pentatonic scales. If you've never done it (a lot), now your chance to brush up on these skills.

The "magic" trick  here is simply using Fm pentatonic in the first four bars and then Abm pentatonic for the last eight bars. Notice how the F minor pentatonic is in fact simply the Ab major pentatonic. It has this twangy flavour we're looking for in jazz improvisation.

Of course, use the video provided for your chance to trade solo choruses with the instructor. Also see Back to Basics Jazz Blues Fundamentals and this Beginner's Guide Video to fully understand the how (and the WHY) to change pentatonic scales after four bars.

In the last few bars of the chord progression, there's a II-V-I in the key of Ab major. Now's the time to "plugin" whatever you know about II-V-I's in that very spot. Whether you know the arpeggios, the scales, or some licks (or all of the above), simply take the last four bars, and commit to making the changes on that cadence.

So, basically, in this step you keep doing whatever you can for the first 8 bars, and aim to make the changes appropriately in the last 4 bars. Also see Making the Changes for All the Things, a rather intensive blog post with three videos included!

Every blues song goes "to the IV chord". So, in that key (Freight Trane), we go from the Ab chord to the Db chord. In the video, you can hear several examples of "making the change" going to the IV chord.

There are several ways to go about this, but one of the most obvious and most interesting is to make the chord in bar 4 come from the altered scale. This can mean several things, one of which is to make Ab7 an Ab7b9 chord, or even an Ab7alt chord.

Going to the relative minor is what gives such songs (like Bird Blues form) their melancholy in the first few bars.

The trick is to play on C7b9 like your life depends on it! Furthermore, consider C7b9 as "F harmonic minor of destination". Furthermore, the most important note to hear in this context is the E natural note ... you've guessed it: it's the third degree of the C7b9 chord.

Pro Tip: You have to think of F minor before the chord happens, so in bar 2. Mostly just aim to use the 7th degree (in French la sensible), which is E natural note, going back to Fm. If you are able to have the listener hear an E natural note in that bar, you're all good!

Observe bars 5 through 8 of this bird blues progression. We have a sequence of descending II-V's ... and they go down chromatically. This is such an easy spot to keep repeating the same idea downwards. See the video for more examples.

Pro Tip: think only of the minor chord (Dorian), since it's going too fast! So after the Dbmaj (or Db7) has landed, immediately play a line in Dbm7 (dorian). Then simply repeat the same line one fret down ... do this twice, and you're set!

Step 9 - Putting it All Together

I hope all these tips can help you get a better handle on improvising on the bird blues progression at your next jam session. Remember, you don't have to work on all these things at once! Slow and steady wins the race, so make sure you master each individual step above before moving on to the next one.

One of our great readers Vasja Jurkas has graciously allowed us to use his study of this form in F. It's great to see it in another key!

Blues For Alice in F - Check out the PDF here!