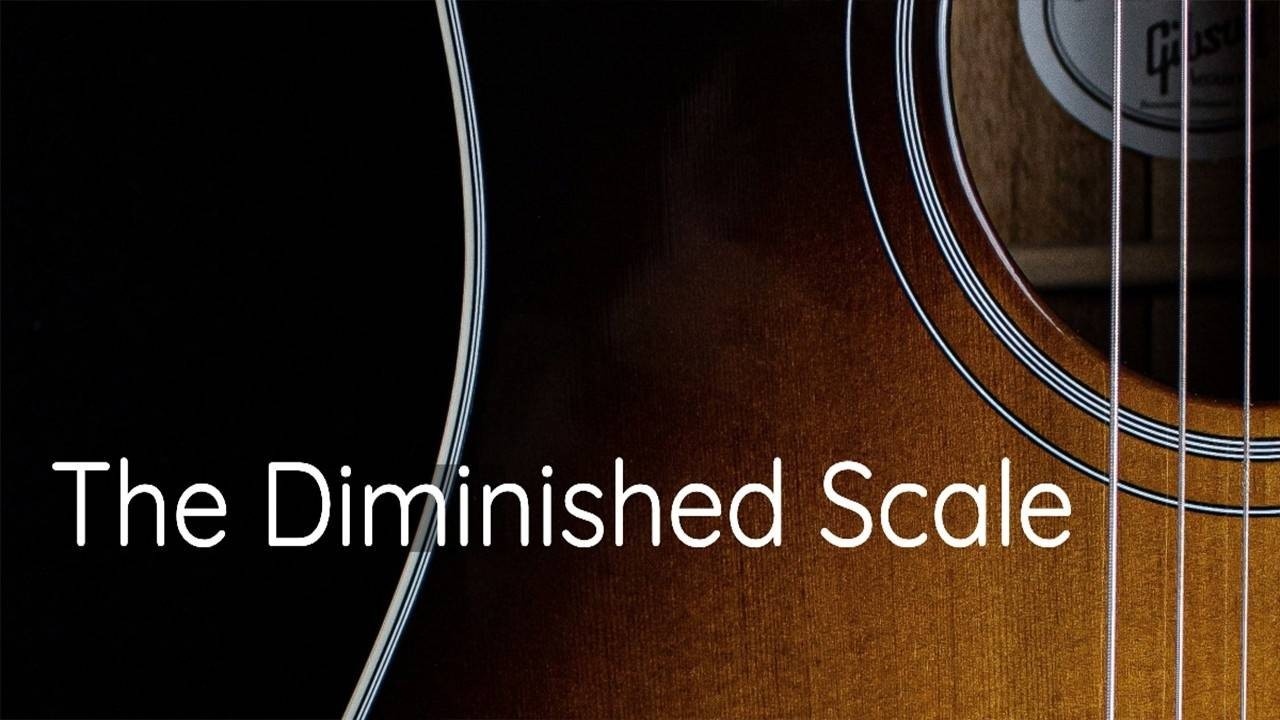 What is a Diminished Scale?

These can be used as a tension device in improvisation and are a totally different sound than the more common major and minor scales.

A curious reader asked a question about it and here is our answer!

What chords do the half whole and whole half scales work over?

If I improvise using the major, minor, harmonic minor or melodic minor scale, it sounds O.K. to me, but I have not found any chords that the diminished scales sound good over. Maybe my ear is listening for something less dissonant!

So if a piece is in the key of C major, is there a diminished/symmetrical scale that will sound good over any or all of the chords in that key.

Would you play the B half whole in the key of C since instead of the Locrian mode?

That's a question that I unfortunately never got the chance to cover here, on the website... Now's the time!

First off, let me start by saying that the Whole-Half and Half-Whole are not different entities, they only reflect the way you choose to see it, in theory.

So if you see a chord symbol such as G13(b9), it matches the diminished scale perfectly. Here's why :

Let's extend it with the b9 and forget about the root.

And now let's approach the G7(b9) chord-tones with a half-step below.

(Notes on the left are half-step approaches from below "into" the notes that define G7(b9) chord.)

Let's rename all the notes we got above, including the approach notes and start on G. We're getting the diminished scale, starting with a half-step.

Analysis of degrees relating to G7 :

So, your question was really about how you can relate all this to the major scale, right?

This diminished scale / sound is mostly used as a tension device. You could (and should) use it when resolving to the major scale, but it doesn't relate, in theory anyways, to the major stuff you're used to.

For example, if you're improvising on a II-V-I in C major :

...you can apply the principles discussed above to the G7 chord, even though the b9 is not in the chord symbol. That's the way jazzmen do it : the diminished sound become a whole "harmonic appogiatura", if you'll excuse the expression.

A very good Montreal saxophonist, Alex Coté, once told me a little about his practice techniques with the diminished scale.

He said that he employed the major triads that exist naturally in there as a point of departure. He would use only one triad at first, applying the different approaches from above and below.

Then he'd work with 2 at a time, the 3, then the 4 of them, with approaches (which become the entire diminished scale)... He said it really made him hear the scale in and out.

A little tip : the 4 major triads are all a minor third apart.

To summarize, the symmetrical diminished scale is a sound used as a tension in music, not necessarily making sense with the theory of the diatonic scales. Learn to use it and identify it in context. All jazz legends used this sound in their improvisations.

...and most of all: listen to Coltrane

a whole lot. (or a whole-half lot if you prefer).

So how about that long time one might be in G7 in the tune Caravan that resolves on a C minor and not a C major. Seems like people play a G diminished scale OR a G7 superlocrian scale there...? Maybe even a C minor scale there during that G7 part..

What would you recommend in that case and how would you think about/rationalize the choice?

In very broad terms I'd say "come up with interesting melodies". In a more specific sense I'd say: we would have to discuss it face-to-face and see what we can come up with when improvising on Caravan together, jamming. (-:

"Go experiment and listen!" is the best advice I can give you sitting in front of this computer screen. Good luck!

Marc Andre's reply is excellent, as always. I would like to ad and idea from my personal experience:

The diminished scale will always sound tense, unless it's resolved. With that in mind, apply it to the dominant (5th) of the one chord: ie, G HW over a progression that's in the key of C Major; G being the five of G.

Taking this concept a little further, I use a C WH over the same progression, BUT, resolving it to a chord tone; usually the 3rd of the chord, or any other note extension that sounds "in" on the chord that you're resolving to.

My reasoning for this is that, the primary purpose of using altered sounds is for their inherent dissonance/tension; and their usage for playing "out". As a matter of fact, any other scale will work, because they are temporary, and will be resolved. IMO, the most important thing is placing the notes derived from such scales in the right RHYTHMIC position. Using the concept of Forward Motion, and taste, will most definitely guarantee success.

that explanation is right on the money! I like to play dimished arpeggios over altered dom chords. A nice little chunk might work like ascend playing G dim7 and descend on Abdim7.That I still retains the tension that I hear in diminished chords, makes a little phrase that makes some musical sense(think call response) and covers all 8 notes of the scale to really impart that " flavor" I n this case the target chord would be G7#9 or b9.

Very nice explanation of the half-whole scale. I never thought of it in terms of half-step approach notes.

Is it correct to think that the whole-half scale follows the same concept, except it applies to approaching the dim7 chord tones from a whole step below?

Absolutely. What you're describing is like the "mirror" of my approach. Right on!

Excellent answer Marc. I would like add to add, from experience and study, that a diminished (W-H)can be used on the I chord, be it Major, Minor, or Dominant, as in Modal vamps, to get an outside sound. This, however, is used as an tension-release device to get out briefly; being aware that one must resolve to a chord tone on the chord of the moment. Placed rhythmically in the right place, it can sound very pleasing and jazz-fusion-like, IF the ear is open enough to hear the temporary dissonant, yet pleasing effect it creates.

I do realize that the original question was about a different progression than a static vamp, to which you gave very sound advise.

Thank you for your knowledge and willingness to interact and answer questions.

Hi Marc-A
This is a perfect explanation for me. For All the Things You Are, I've made my G7 in the A section a G7b9, but didn't know the corresponding scale. C harm min sounds excellent.
If I have a question, I always look up your web-site first as you are so clear when you explain things.

I just wanted to commend you on giving such a practical answer to the diminished scale usage.

More than any scale, I've been attracted to the diminished sound since I first heard it, but finding ways to use it has been, and continues to be, an ongoing journey of exploration. Your explanation of it being an harmonic/melodic appogiatura is spot on, and one I've been exploring against different harmonies besides altered dominants.

Thanks again for your time and for sharing your knowledge.

Hey teacher, you're great, you work is awesome, thanks for share your knowledge with us.