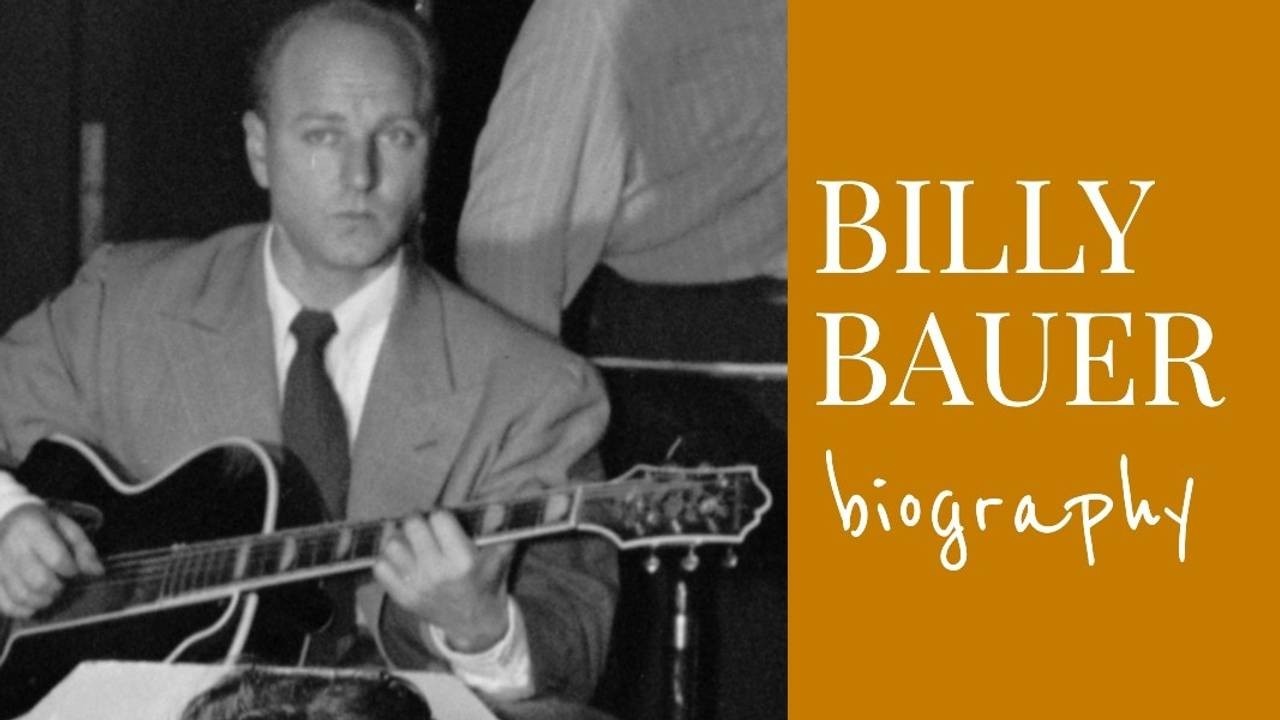 Billy Bauer was a key guitarist in jazz history, considered to be one of the fathers of modern jazz guitar. He had extraordinarily varied stylistic ability, ranging from traditional swing guitar to 'cool' jazz and even free jazz.

Bauer played with the likes of Charlie Parker, Woody Herman, and most famously, Lennie Tristano. He became known as one of the central figures of the Tristano "school", along with Lee Konitz and Warne Marsh.

Bauer was born in New York City on November 14, 1915. His childhood was rich with music; his mother was a pianist, and his father an amateur Vaudeville performer. At parties, the family would often stand around the player piano and sing, harmonizing on the fly.

At age 9, Bauer broke his leg and was out of commission for the summer. To lift his spirits, his father bought him a ukulele, and by autumn he was able to play tunes by Cliff Edwards aka "Ukulele Ike".

The next few years saw Bauer cycle through various string instruments - after ukulele he tried his hand at mandolin, and then quickly switched to banjo. He took his first banjo lessons in the back of a candy store, with a teacher that emphasized the importance of reading music.

Bauer became quite adept at the banjo, and at age 14 he had his own radio show where he would play solo tunes in the style of Harry Reser. The show aired for six months, and was Bauer's first taste of life as a professional musician.

He began playing in small ensembles, and as the banjo began to fade in popularity, he transferred his skills over to the guitar. He started with a resonator guitar, as it was the only instrument he could find that was loud enough for the ensemble.

Bauer became an in-demand guitar player, playing in clubs for 6 hours a night, 7 days a week. His big break came in the 1940s, when he began playing with Woody Herman's First Herd.

This group had a roster of top-tier jazz musicians, including Neal Hefti and Flip Phillips. Most notably, they recorded a piece written and conducted by the great composer Igor Stravinsky.


In 1946, Bauer made the bold move of leaving the First Herd to join forces with Lennie Tristano. Tristano was a singular pianist and luminary jazz teacher, whose pupils included Lee Konitz and Warne Marsh.
In Tristano's group, Bauer uncovered new territory for jazz guitarists. His single note lines became more flowing and lyrical, and he abandoned typical swing rhythm guitar patterns in favor of more pianistic approach.
Tristano would often have his students and band members composed "contrafacts" - original melodies over chord changes from an existing standard. Notable Tristano school contrafacts include Marshmallow (over Cherokee), Line Up (over All Of Me), and Marionette (over September in the Rain).
In 1949, the Lennie Tristano sextet recorded Intuition, which is considered by historians to be the first free jazz recording. Free flowing lines are held together by the overall texture rather than any clear melody or key, which was quite forward-thinking for the time.
1949 also saw the opening of one of the most important jazz clubs - Birdland. Named after Charlie Parker, the weekly lineup included musicians such as Stan Getz, Art Tatum, Bud Powell, and Billy Bauer. Later, in 1954, Bauer would record with Charlie Parker himself on an impromptu session for Verve.
After years of work as a sideman, as well as studio and teaching work, Bauer finally recorded his first and only album as a leader in 1956. The result was Plectrist, which showcases Bauer's strength in a straight-ahead jazz setting.
Later in life, Bauer became a sought-after instructor, publishing his own guitar method books and teaching privately. Most famously, he taught the rock guitarist Joe Satriani.
As a teacher he was known for championing musical literacy, as well as helping each of his students develop their own personal sound. His approach was so universal that he taught musicians of all instruments, not only guitar.
In 1997, Bauer published his autobiography Sideman, full of anecdotes from his life at the cutting edge of jazz. In 2005 he passed away from complications of pneumonia, leaving behind a legacy as one of jazz guitar's most singular voices.

"He becomes this hidden giant. And it’s very easy to forget how profound the influence of those Lennie Tristano records were."

"Charlie listened to Lester, but he didn’t play like him. What’s the use of copying a lick? You can hear that."