The goal of this series is to actually put a lick under your fingers. Here, there’s no more searching for ideas in the sea of jazz theory information. We’ll give stuff you need to play and be creative. Today, we're going to discuss playing over turnarounds. 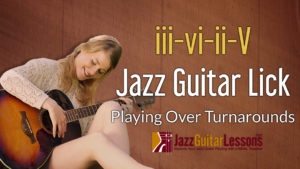 Let’s get started on the concept!

Today’s idea is taken from the February 2016 Tune of the Month Club for the song, “My Funny Valentine”. We’re going to give you some material to play over the classic iii-vi-ii-V turnaround which can be applied to other turnarounds.

You’ve probably seen the iii-vi-ii-V turnaround in tons of tunes and perhaps you didn’t know how to approach them. The great thing about this material is that you can easily apply it to I-vi-ii-V progressions, since the I and iii are related.

Often times, in a iii-vi-ii-V progression, we are looking at the iii-vi as the minor ii-V of the ii. In our case, the chords are Am7-D7-Gm7-C7, so we consider the Am7-D7 as the II-V going to the G minor chord. And that's why we would then make our regular Am7-D7 into what we call a minor ii-V with the chords Am7b5-D7b9 going to Gm7-C7.

Sometimes, however, this is treated as iii-vi-ii-V without any modifications, which would leave it as Am7-D7-Gm7-C7. If this is the case, you would simply change any Eb notes that are being playing over the Am7 to E natural.

You could theoretically continue going down to F-7 / Bb7, Eb-7 / Ab7, etc., but here we have reached our target chord: Fmaj7.

Download ALL of the shapes here: "Playing Over Turnarounds" - PDF (includes TAB)

Next, we will look at a few more examples with ideas that you can play over the same progression.

Here is Example A. This one is simply an ascending arpeggio that jumps back to lead into the 3rd of the D7 chromatically. Then, there’s another arpeggio for the ii chord that leads into a descending scale pattern to the 3rd of the F major.

Next, we have Example B. Here is a somewhat similar approach with more of a focus on making use of triads. Here we have Cm over the Am7b5, D major over the D7, Bb major over the Gm, and finally C major over the C7 ending on the 7th of the F.

Lastly, we have Example C. This example is a bit of a mix of the first two. It makes use of chromatic approach patterns followed by triads to create some nice variety.

Now's when you can jump in and try it for yourself. In our YouTube video, I take a few turns trying this, then I comp for you! Have fun!

Download ALL of the shapes here: "Playing Over Turnarounds" - PDF (includes TAB)

Thanks for joining us for Hands-On Jazz Guitar, Volume 8. Hopefully, you won’t freeze when you see those turnarounds anymore. You will find that you can use this material over lots of different things. Be sure to explore for yourself and really make this material your own.