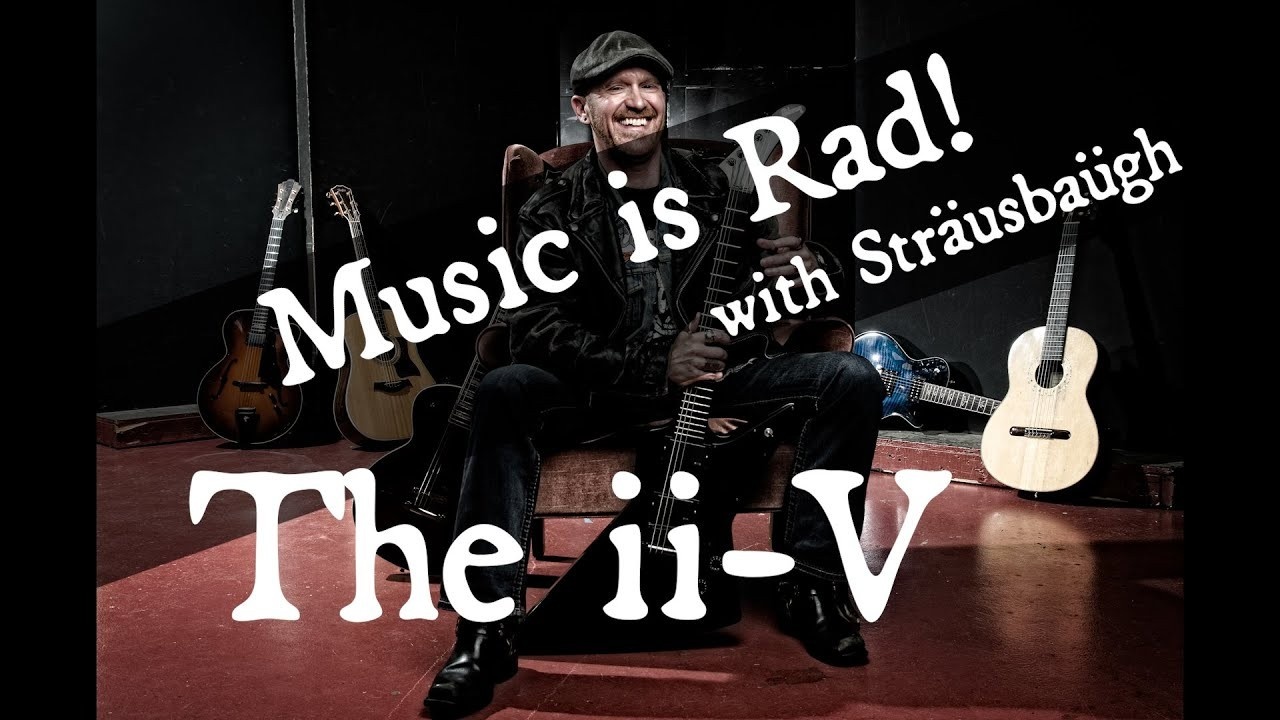 What the 'ii-V' Really Is. And What It Isn't

Pippen and Jordan. Batman and Robin. Sherlock and Watson. Lloyd and Harry. 3PO and R2. Every Buddy Cop movie.

Dynamic duos, to be sure. And while each member of the duo is completely self-sufficient, one is definitely saucier and attention-grabbing than the more stable and reliable one.

If you've spent more than a few minutes studying Jazz, you've heard about this thing, 'the ii-V.' We're told to practice them in every key, and as you analyze more and more tunes, you start to see them. Everywhere.

Simply, 'ii-V' refers to the second and fifth chord in a key. Using the key of G major as reference, that means our A (ii) and our D (V) chords.

In Music, lower case Roman numerals indicate 'minor,' and upper case indicate 'major.' The word we use for 'what kind' of chord is quality.

For simplicity, this discussion will focus on the major 'ii-v,' ie., the ii-V present in a major key. We'll save minor ii-Vs for another day.

Major keys are all constructed following the same formula. Hence, the ii chord is always minor, and the V chord is always major. In Jazz, we add at least the seventh to every chord, giving us Amin7 (ACEG) and D7 (DF#AC).

It's important to note that ii and V must be minor7th and dominant7th chords, respectively! If it's Amin7 and Dmin7, it's not a ii-V. If it's A7 to D7, also nope. Those are different things, with different sounds and different jobs.

But knowing how to spell a chord and identify its quality is just the beginning.

If you take the letters 'c-a-t,' is that a cat? No, it's the word we use to represent one.

Chords are kinda the same. Amin7 is spelled ACEG, but it's more than that. Its sound is what we call Amin7. These four notes can occur in any order, and you don't even have to play all the notes to 'say' Amin7. Containing two Perfect Fifths (A-E, C-G), it's a very stable sound. Think of 'ii' as The Straight Man who sets up...

The Attention Seeker; D7, spelled DF#AC. Your eyes may not be able to spot a glaring difference between these two chords, but your ear will; F#-C, aka the Diminished Fifth, aka the Tritone, aka The Devil's Interval.

This is part of the 'tension' that everyone's talking about, and the most obvious.

However, if you look at ii and V separately, you're missing the point.

ii-V is a Compound Word

The 'ii-V' is a compound word, and like any compound word, it has a different meaning than each word separately. We even call it 'the' ii-V. Hell, we call it 'it.' 'It' is one thing.

And this compound word, this 'ii-V,' has a specific job, or 'function.' Because ii and V share two common tones, they sound somewhat similar. The stability of ii gives way to the compressed tension of V. This tension is then released somehow when V resolves (more on this in a second). In most Music you've heard, chords play roles and have different meanings. Nouns, verbs, and adjectives. If you've ever heard Autumn Leaves, Stairway, La Bamba, or Free Fallin,' you've heard 'functional harmony.'

Or in the case of Jazz, everything until about 1959 or so. Then Miles Davis happened again. ii-V 'becomes' the (perfect) Dorian 'i-IV' vamp on 4 On 6. Wes Montgomery, Smokin' at the Half-Note. Wow.

If you don't begin seeing structures like the ii-V, let alone larger structures like iii-vi-ii-V, you're destined to keep seeing trees instead of the forest. After all, chords are the words of the Musical language, and sentences are Musical phrases.

In other words, if you just play chord to (seemingly) unrelated chord, you're just saying random words and calling it a 'sentence.' Pizza Thursday Chariot Kittycat!

Why these two chords?

Still, there are unanswered, fundamental questions: why these two chords, in this specific order? And how do I make it sound like Music vs. incoherent babble?

The first question has to do with that fancy and misunderstood Circle of Fifths, or rather, what it represents; the irrefutable Musical gravity of the interval we call The (Perfect) Fifth. It isn't just a handy tool to memorize keys, just like the Periodic Table isn't just for memorizing elements.

And it gives insight into how notes, and the chords they're built from, really want to move. Because just like our alphabet, Music doesn't happen alphabetically, ie scalarly.

Notes really want to resolve down a Fifth, or counterclockwise on the Circle of Fifths. Again, it's gravity and Science. Think of a waterfall, or a Slinky going down stairs.

In fact, if you put the notes in the key of G major in a more logical, Fifth-based progression, it would be (C)-G-D-A-E-B-F#... just like the Circle of Fifths. So, instead of I-ii-iii-IV-V-vi-vii, it would be (IV) I-V-ii-vi-iii-vii. If you're wondering why C (IV) is on the other side, that's yet another discussion for later.

With our key laid out more 'naturally,' it's a cinch to notice that ii (Amin7) resolves down a Fifth to V (D7), which then has the option to resolve down another Fifth to I (Gmaj7).

'Has the option?' Very often in Jazz, we set up a solid resolution to our I chord via our trusty ii-V... only to go somewhere completely unexpected. In fact, good composers/improvisers know how to keep unresolved tension going for a WHILE. This is everywhere, and is a hallmark of the style. In fact, we talk about 'ii-Vs,' not 'ii-V-Is.'

'Voice' refers simply to the notes in a chord. 'Leading' refers to how notes in one chord connect, or 'lead,' to the notes, or voices, in the next chord. Voice leading is a relatively simple concept to understand, but takes much longer to truly internalize. One's command of voice leading is a good indicator of how well one 'sees' Music. Herein lieth the beauty of voice leading: it's happening all the time – harmonically, melodically, rhythmically.

Conversely, nothing bothers me more than seeing videos or TABS showing arpeggios, one chord after the next, shown as separate 'events,' and always starting on the root. It's the opposite of what's actually going on Music.

The following examples are not intended to be more 'licks' to add to your arsenal. They're included to help you understand, through 'real world application,' every ii-V (and by extension, any chord changes) you come across.

Performance Notes:
- Some wise cat once said, 'play the rests!' Shut up occasionally. Let rests drive and 'swing' your lines. Everyone will thank you for it

- The following excerpts include only chord tones! The reason is twofold: 1) to show you what's possible with basic chord knowledge, and 2) keep it as succinct as possible.

- Examples don't just start on the root! This is HUGE. Nothing sounds more 'nOoB' than starting and/or jumping to the root of each chord.

- There is a mantra I have my students memorize – '7 to 3.' This means that, when you have two seventh chords a Fifth apart ( a la, ii-V), the 7th of one chord (G in Amin7) resolves down by step/half-step to the 3rd fo the next chord (F# in D7). When studying the examples, be sure to look and listen for this!

Mike Strausbaugh is a music mentor/guitar coach/cat dad who lives in Colorado. He loves learning about music so much that he went and got three Masters' of Music (in Jazz studies, composition, and classical guitar). He has taught privately for more than 20 years, and really loved his pre-COVID music faculty position at Metro State Denver.