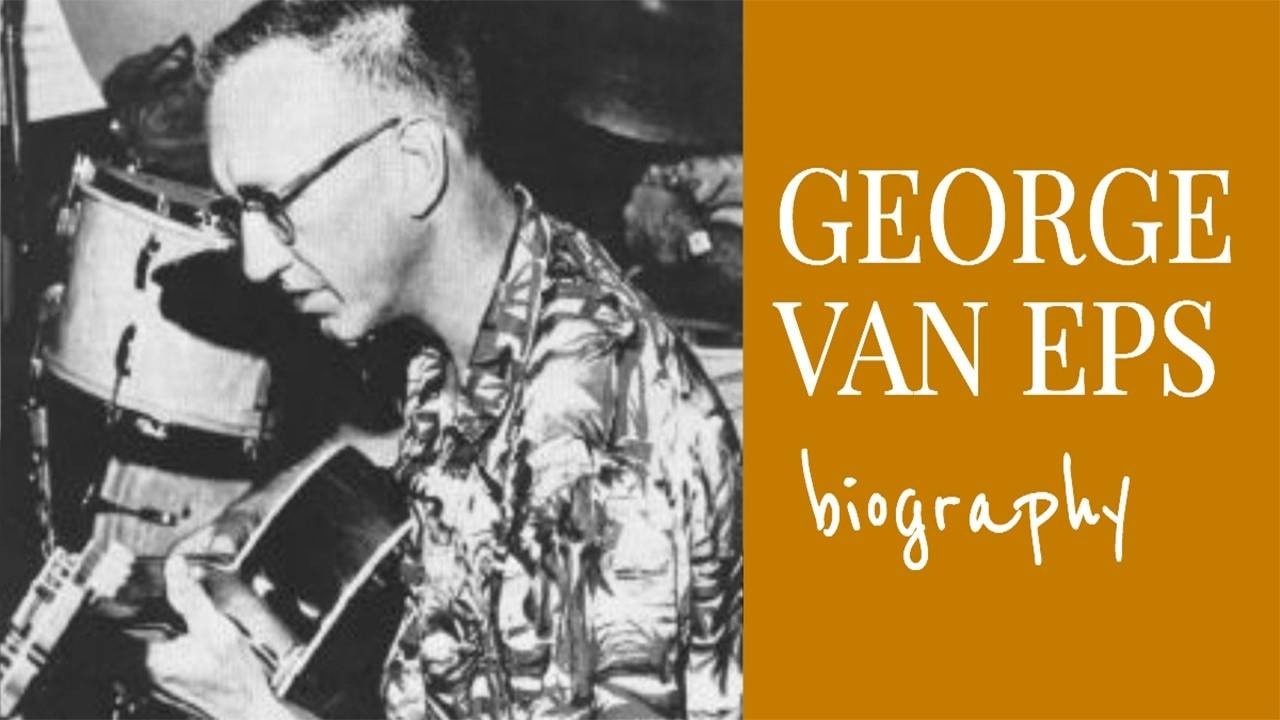 George Van Eps was an innovative guitarist and inventor, also known as the "father of the 7-string guitar". His pianistic approach to the guitar utilized harmonized scales and inner moving voices to create entire chord solos, which had previously not been done.

Van Eps performed with the likes of Benny Goodman, Frank Sinatra, and Paul Weston, and had a lengthy career as a studio musician. As an educator, he authored the towering Harmonic Mechanisms For Guitar, and taught guitarists including Ted Greene and Fred Fried.

George Van Eps was born in Plainfield, New Jersey in 1913. He was surrounded by music as a child - his father, Fred Van Eps, was a professional banjo player, and his mother played classical and ragtime piano.

A rotating band of musicians would visit the Van Eps' home during George's early life, the most notable being George Gershwin. Gershwin was Fred Van Eps' accompanist, and would bounce young George on his lap while playing the piano.

In addition to being musical, the Van Eps family were also craftsmen: six generation of the Van Eps family were trained watchmakers, and Fred Van Eps owned a banjo factory. The organizational skills and analytical nature of industrial design become a key influence on G. Van Eps' unique approach to the guitar and his various inventions.

During a severe bout with rheumatic fever at age 9, Van Eps learned to play the banjo while lying in bed, plucking out the popular tunes of the day. He became captivated by music and quickly began playing professionally, even making recordings at only 14 years of age.

However, in 1925 Van Eps became inspired by the guitar after hearing Eddie Lang and Joe Venuti through his crystal radio. Two years later, he would spend his first paycheck from his summer job on a Martin guitar.

In 1928, George and Fred Van Eps went to New York to see the great classical guitarist, Andres Segovia. Inspired by this, G. Van Eps would spend eight years working on classical repertoire. Although he was not known for his classical playing, he would later incorporate elements from the technique into his fingerstyle electric guitar playing.

In the following decades, G. Van Eps' career took off as he played in the large ensembles of Benny Goodman, Ray Noble, and Paul Weston, as well as Hollywood studio work.

During the mid 1930s he developed a concept to expand the range of the guitar by adding a low A string. This was inspired by his mother and brother who both played the piano.

Van Eps designed the blueprint for the guitar himself and took the concept to Epiphone. They were enthusiastic about the idea, and quickly got to work with a master luthier. In an interview with Rolly Brown, Van Eps compared being in the workshop with the luthier with "being in labour".

He was able to adapt to the 7-string guitar quite easily because he had been practicing in the tuning A-E-A-D-G-B (the bottom six strings of the 7 string tuning) for a year and a half. Dubbing this new instrument a "lap piano", he began to use it at live performances shortly after receiving the finished product.

In 1956, Van Eps debuted the 7-string guitar on record with his first album as a leader: Mellow Guitar. His harmonic sophistication is on full display here, harmonizing nearly every note with a chord. His command of triads and inner voice movement was a stunning development for the jazz guitar, and remains a landmark even today.

Taking a brief hiatus from professional music to start a miniature steam engine hobby shop, Van Eps returned in the late 60s with a trio of albums for Capitol Records: My Guitar, George Van Eps Seven String Guitar, and Soliloquy.

Van Eps believed Soliloquy to be his last recording, and began work on an extensive instructional book of harmonic exercises for all instruments (much of it involving scales harmonized in triads). This became the 3-volume Harmonic Mechanisms For Guitar, a large collection of exercises used by the likes of Ted Greene and Kurt Rosenwinkel, which are still in print today.

In the 1990s, Van Eps returned to performing and recording. He made a duo record with the guitarist Howard Alden, as well as a split recording with another elder statesman of jazz guitar, Johnny Smith.

Van Eps continued performing in California until his death in 1998. He remains an outlier among the jazz guitarists of the 20th century for his unmatched knowledge of harmony and his effort to expand the possibilities of the instrument.

The first George Van Eps 7-string was created by Epiphone, with subsequent models created by Grestch. The low A string for these guitars was manufactured by John D'Addario. Van Eps also handcrafted the bridges for his guitars, a skill that he learned from working in his father's banjo factory.

In the 1950s, he was also known for having invented a string damper to reduce the feedback created by the open strings of the archtop guitar. These were manufactured by Gibson for a short time, and used by the likes of Jim Hall, Barney Kessel, and Herb Ellis.

"An objective, a target in life, must be very thoughtfully and very carefully chosen, and then pursued with every ounce of human effort."

"The greatest influences were Eddie Lang, initially, and then I heard the potential of the instrument when I heard Segovia play."

"You can’t teach anybody. A person has to teach himself. But I think a coach is a better description, because a coach can steer a person around some of the pitfalls and some of the things they can fall into."

"...approach your instrument with love and respect. I say that because the respect bounces back. There’s a feedback. You treat it well, it’ll treat you well. You beat it to death; it’ll beat you to death."

"...in concept, jazz is improvisation in its highest form."