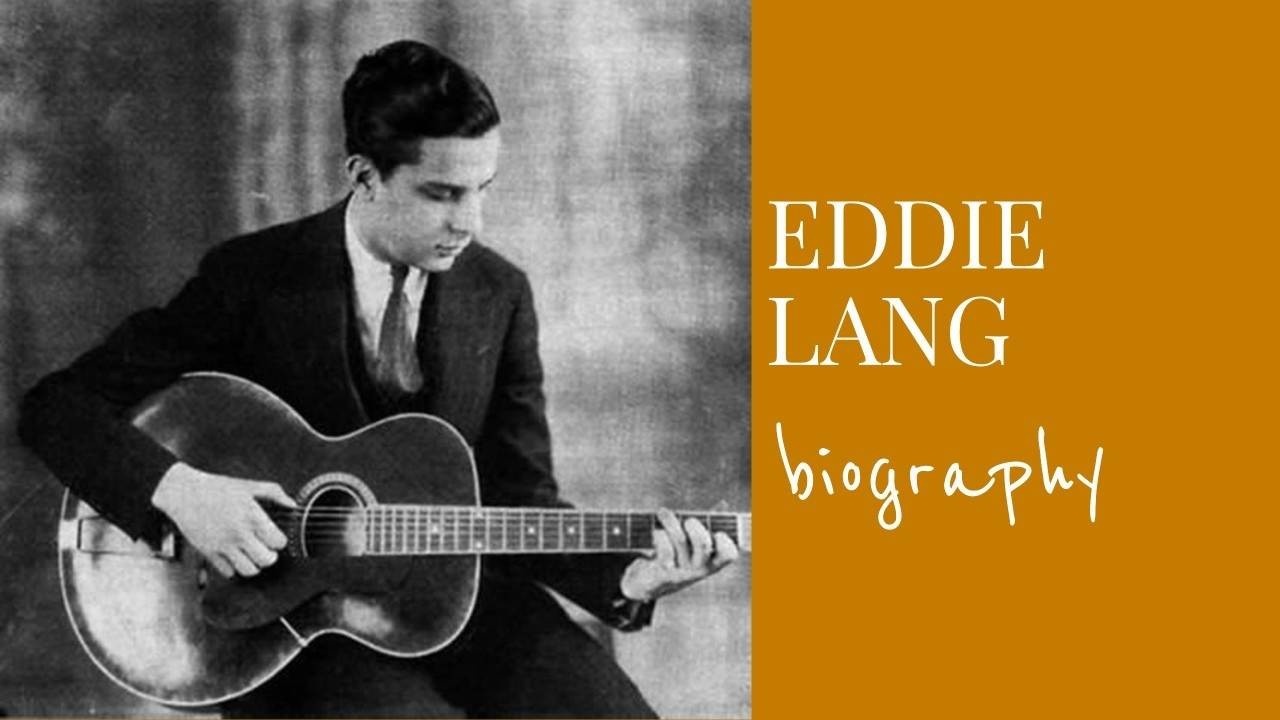 On March 30, 1933, over two thousand people gathered in Philadelphia for the funeral of the legendary jazz guitarist Eddie Lang.

Just four days earlier, Lang had tragically and unexpectedly passed away at the age of 31 during a routine tonsillectomy. He had been apprehensive about the surgery, but was urged to proceed at the behest of his friend Bing Crosby.

Lang's early death, which came before rise of both the electric guitar and the height of the popularity of the home record player, would forever alter the jazz history books. Despite his overwhelming influence during his life, he is seldom mentioned in any serious contention with the jazz guitar greats.

But Philadelphia is one place where his contributions are still recognized: for over a decade, the city has celebrated Eddie Lang day on October 25th. Outside the Saloon restaurant at Seventh and Clymer, a historical marker proudly declares him "The Father of Jazz Guitar".

Eddie Lang was born in 1902 as Salvatore Massaro in Philadelphia, Pennsylvania. His stage name was taken from his favourite basketball player from the local team, the Philadelphia SPHAs.

Lang began his musical journey earlier than most, at age one and a half. His first instrument was a cigar box guitar made by his father, who he described as "a maker of guitars in the old country".

A few years later, Lang was hit by a streetcar and spent the year recovering in bed. His parents used the money from the personal injury settlement to buy him a violin, which he used to begin his formal music training at the James Campbell School.

It was there that Lang received training on the violin, as well as music theory and harmony. Outside of school, he stated that "fooled around with the guitar at home", and also played the banjo.

This kind versatility was not uncommon in those days. Students were commonly taught the fundamentals of music before specializing in a specific instrument, which facilitated the transfer of skills between different instruments.

Many have also remarked on Lang's natural musicality and superhuman ear. This, as well as his training, likely contributed to his virtuosity.

One of Lang's friends during this time was a classmate and neighbour named Joe Venuti, who was also learning the violin and guitar. Together, they honed their skills on both instruments through extensive practice sessions that Venuti claimed lasted up to 10 hours.

The two became an influential pair, beginning in 1918 as members of a band led by Chick Granese (Lang on banjo, Venuti on violin). The performances with this group helped to establish Lang as a presence on the dance band scene, including Billy Lustig's Scranton Siren Orchestra.

Eventually, Lang shifted his focus to the guitar as a member of the Mound City Blue Blowers. This was a novelty jazz group that used unconventional instruments such a comb and tissue paper, suitcase (as a percussion instrument), and kazoo.

In Deep Second Street Blues (1924), Lang can be heard playing one of the first single-note guitar solos committed to record.

In 1926, recording quality began to improve significantly, and as a result, Lang's star began to rise. In the following years he recorded with Venuti, Red Nichols, Bix Beiderbecke, and countless others.

A young Django Reinhardt was introduced to the Venuti & Lang recordings through the collection of a friend, and they served as a major inspiration during his development.

One standout among Lang's vast output during this time a solo guitar recording of Rachmaninoff's Prelude 3 Op. 1, due to the supposed fact that Lang could not read music.

In 1929, Lang recorded Blue Guitars 1 & 2 with blues guitarist Lonnie Johnson. Due to the racially segregation of the times, Lang used the pseudonym "Blind Willie Dunn" to conceal his race.

As a member of the Paul Whiteman Orchestra, Lang developed a close friendship with the vocalist Bing Crosby. He became Crosby's regular accompanist, appearing on recordings, radio broadcasts, theatre performances, and The Big Broadcast (a Hollywood feature film).

Lang was set to appear in a second film alongside Crosby, this time with a speaking role. However, he struggled with laryngitis, a chronic sore throat, and gastrointestinal problems, which made such a role difficult.

Although he distrusted doctors, Lang sought medical advice after being convinced by Crosby. He was recommended for a tonsillectomy, which took place in New York City. The surgery was initially deemed a success, but in the hours that followed, Lang passed away for reasons that are still unknown.

It has been speculated that he bled to death due to medical malpractice. However, at the request of Lang's wife Kitty, an autopsy was never performed. She recalls, “when Bing found out, he cried in my arms like a baby.”

"Eddie also knew when to play fancy single string solos and when to lay back to support others in the band. It was an education to hear him play."
- Frank Hamilton