Toronto jazz legend Ed Bickert is (like many Canadian treasures) little known outside of the rarefied world of jazz guitar aficionados and Telecaster obsessives the world over. But his influence is far reaching. So many guitarists from Canada have absorbed elements of his sophisticated and understated style that it’s likely he has had an effect on guitarists everywhere whether they even realize it or not. Certainly many a young Canadian whippersnapper has made the pilgrimage to NYC and brought with them at least a handful (if not an armload) of harmonic licks and sequences to subliminally lay on the jazz cognoscenti. Ed is everywhere in modern jazz guitar. But what does that mean? What more can jazz guitarists learn from Ed Bickert?

It’s an oft cited piece of advice to guitarists in all styles. Rock n Roll guitarists are told to “learn rhythm guitar” if they want to work, yet most players obsess over “playing lead”. In golf terms it’s “Drive for show, putt for dough.” While the simplistic delineation between lead and rhythm is kind of a uniquely rock n roll paradigm, there is still at least a little something to it with regards to jazz. Ed Bickert made a career out of playing sublime chords with impeccably considered voice leading that left many a player on the bandstand and in the audience mesmerized. I remember seeing a band with Ed and Toronto saxophonist Mike Murley in the 90s and the whole night Murley was entranced with Bickert’s comping and harmonic excursions.

Almost to the point of distraction. During his solos, other band members solos, all he and the audience could do was fixate on the subtle sophistication bubbling under the surface of the music all night long. It was that good. And it always was. His consistency of conception was staggering. Check out almost anything he recorded. There isn’t a bad note anywhere. The daunting aspect of his artistry is just how much of his musicality comes from, well, music! Ed Bickert knows a lot of songs. His familiarity with the Great American Songbook is deep.

Like many players of his generation, his relationship to this repertoire is not an academic abstraction but something borne out of knowing the music because they were songs he grew up hearing. As a result, the harmonic sensibilities that are embedded in the repertoire become as malleable as clay. You don’t get the impression that he’s forcing any sort of artificial conceptual ideas on the music but that he knows the melodies inside and out and has spent a lifetime adorning those melodies with beautiful chords.

What does this boil down to? I think the word is CONTEXT. Learning a whole bunch of chord voicing from a book or pages of chord diagrams (I’m thinking of things like Ted Greene’s Chord Chemistry) will yield little to nothing in terms of real world harmonic knowledge. But picking a tune and learning how to harmonize it or composing a comping study with some clear voice leading goals will yield immediately usable and musical results. Tone is in the hands

Here’s another internet cliché that, in a lot of ways, really is true. There are many videos of Ed Bickert playing his 1960s Telecaster with both the original single coil in the neck and the later Gibson humbucking pickup. I honestly can’t hear a discernible difference. He probably could make a Parker Fly sound just as much like him. Because it IS him! His ideas, his fingertips, the way he attacks and releases the notes he chooses. Of course, we all need to play and instrument that inspires us to play the way we want to sound, and a lot of this comes down to how it feels in our hands.

I think he may have acquired the Telecaster when he was doing a lot of studio work because it worked in a variety of commercial settings a little better than the hollow bodies associated with jazz. But ultimately he made the Fender sound as warm and elegant as any “jazz” guitar. So remember, if you have a quality instrument and a good amp, you can probably make almost any style of guitar work for straight ahead jazz with the right setup and a little tweaking. But by all means get a Super 400 if you can “swing” it and can afford the insurance policy.

Focus on your thing

Maybe it’s something about being Canadian. Ed Bickert quietly pursued his art in the relative obscurity of Toronto and developed a truly distinctive conceptual approach to jazz. He seemed truly uninterested in the “fame” of American Jazz notoriety. The world should probably be thankful for his lack of interest in the limelight as he may never have had the peace of mind to listen to his inner ear otherwise. Would such a subtly refined style have emerged amid the hustle and bustle of being on the road all the time, going club to club? We’ll never know. But guitarists can heed the example of Ed Bickert and indeed any great local player who focuses on the refinement of his art over the ambition of notoriety for its own sake.

There’s a lot to be said for being the best player and musician you can be and letting the accolades be of secondary (or tertiary) importance. It will probably take care of itself. Ed Bickert lived a life of substance and stoicism. While those attributes may be in short supply in our modern pop-culture obsessed world, a return to those values might be well advised.

Here are some sessions where Ed Bickert has been a part of: 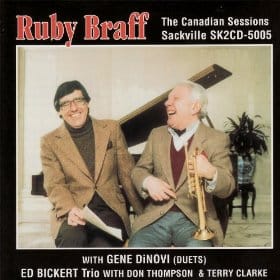 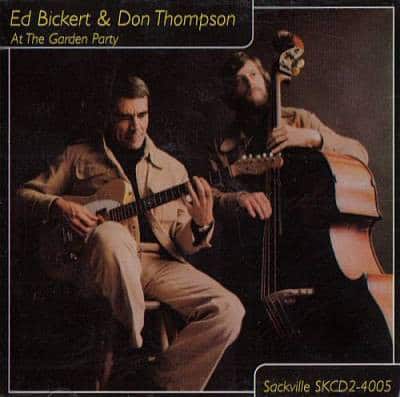 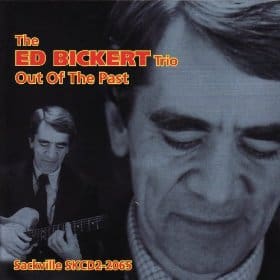