The goal of this series is to have you do some “hands-on” playing. All too often, we intellectualize the process of learning jazz. We’d like to change that, so we are here to work on both playing and learning. Today we will discuss re-targeting your favorite ii-V licks to get hipper, more modern sounds. These are often referred to as backdoor jazz guitar licks. 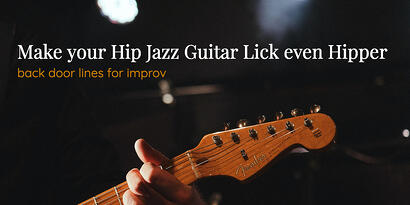 Today’s line can be found in our October 2015 issue of our Tune of The Month Club, “Stella By Starlight”. The line is over a common chord progression -- but it’s not a typical ii-V-I. We’ll look closely at the lick, then get to work using it a few different ways to enhance our playing.

Today’s concept involves an alternate ii-V chord progression. Look closely at the lick, and the accompanying chords on your screen. You may recognize the chord sequence in the first measure -- it’s a iim7-V7. There’s a difference, however. Normally the V7 chord resolves to the relevant IMaj7 chord. In this case, it does not.

Download ALL of the licks here: "Backdoor Lines for Improv" PDF

This is because we’re looking at an “alternate” use for a ii-V progression. The FMaj7 chord is still the “one” chord, but the Eb7 before is best described as a “Flat 7 dominant”. The Bbm7? Well it’s simply the partner iim7 chord to the dominant Eb7 chord. It creates a “ii-V” sound, then changes course toward the Fmaj7, our “one” chord.

We have a nice little lick that fits the changes nicely! But there’s more to it. We’ll show you in a moment.

Now I’d like to show you three new ways to use this idea in your playing.

For Example B, we'll take a similar approach to Example A, but reverse the direction of the line.

Finally, here’s the really hip stuff. I think this is really cool. Example C takes us back to the original lick, with a twist. Look at the chords -- the lick actually fits very well with a standard ii-V-I chord progression! In fact, it sounds even hipper, as it accentuates chord extensions. Suddenly, the #9 and the b9 extensions appear in the lick. We did not change the lick, but we change the context in which we use the lick instead.

Substituting a lick based upon the “flat 7”dominant chord can provide a great avenue for hip sounds. Next time you see Gm7-C7, slip in some Bbm7-Eb7 instead, and see how it sounds. And then do the reverse! It’s got a pretty hip vibe to it. Try it sometime!

Now we have four ideas to use when improvising! And it’s really just the beginning. Imagine taking all four of these examples and using them over a common ii-V progression. Then imagine using them over the b7 dominant progression, as found in Stella By Starlight. Every new idea you create can be tested in these two scenarios.

Now it’s time for you to try your hand at improvising. Jump in, and “wing it! You just play, that’s it. No need to play these ideas -- although you can try! Your main goal here is to improvise.

Download ALL of the licks here: "Backdoor Lines for Improv" PDF